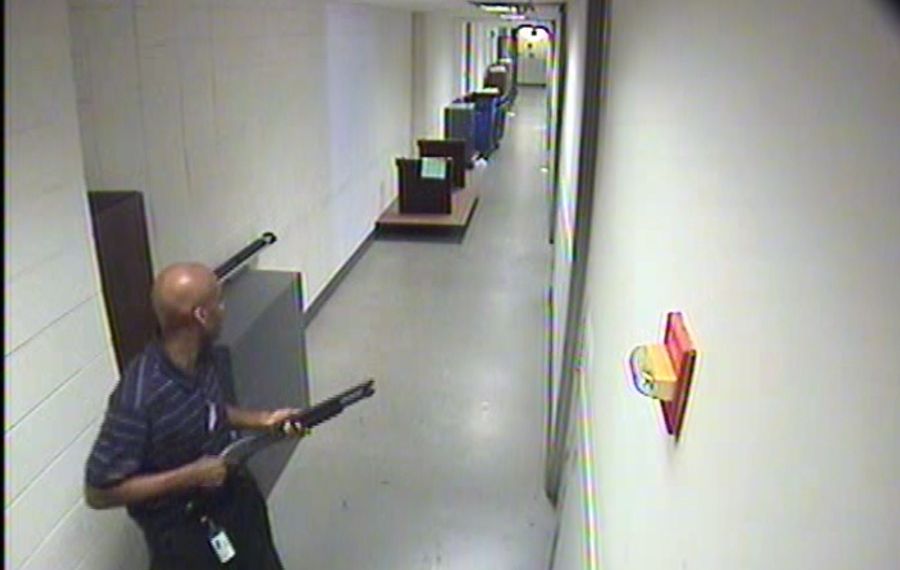 WASHINGTON – The Washington Navy Yard shooter believed he was being targeted by an “ultra low frequency attack” and left a note saying that this was “what I’ve been subject to for the last 3 months, and to be perfectly honest that is what has driven me to this,” the FBI revealed Wednesday.

Aaron Alexis, 34, a computer technician for a private Navy contractor, killed 12 people in the Sept. 16 rampage as he fired a sawed-off Remington 870 Express shotgun, into which he had etched several notes, including “End to the torment!”

The FBI also released chilling surveillance video and photographs from Building 197 at the Navy Yard, including scenes of Alexis in a dark-blue-and-white shirt and dark trousers wielding the shotgun as he stalked hallways and stairwells in search of victims.

Valerie Parlave, assistant director in charge of the FBI’s Washington Field Office, said Alexis did not expect to survive the shootings that spanned 70 minutes that Monday morning. “There are indicators that Alexis was prepared to die during the attack and that he accepted death as the inevitable consequence of his actions,” she said.

She also emphasized that there was no evidence Alexis was intentionally hunting down any co-workers or supervisors he might have known since he started working at the Navy Yard on Aug. 25. She added that he was involved in a “routine” office disagreement the Friday before, but said that incident had nothing to do with his motive for the shootings.

The bureau also released a timeline showing that Alexis arrived at the Navy Yard at 7:53 a.m. EDT in a rented blue Toyota Prius with New York license plates and parked in a garage directly across from Building 197.

According to the timeline, he walked into the building carrying a backpack and was next seen headed to a fourth-floor bathroom carrying the backpack and a clipboard.

At 8:15, he left the bathroom with the shotgun “but without the backpack or a clipboard.” A minute later, he shot the first victim in the building’s 4 West area. The first 911 emergency call came a minute later.

According to an affidavit from FBI Special Agent Sarah Jones, the shooter’s body was found near a 9-millimeter semiautomatic pistol that authorities said he took from a security guard he shot. The shotgun was recovered on the first floor with Alexis’ ID badge for access to the building nearby.

Agents recovered his Lenovo Thinkpad T500 laptop computer at a nearby Residence Inn, where Alexis had been staying in Room 716 for nine days. The FBI did not reveal what investigators found on the various devices beyond the statement that an “ultra low frequency attack” had driven him to kill others.