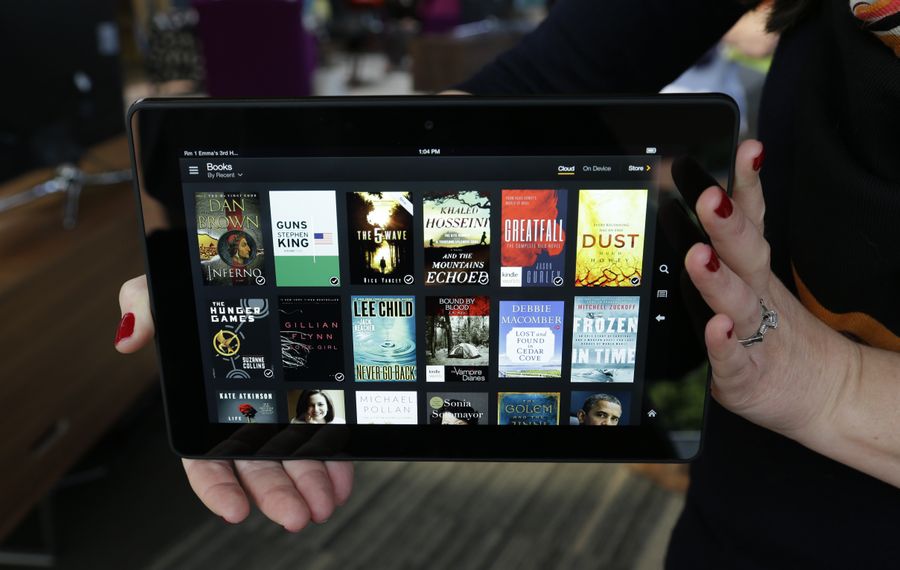 But Amazon is really targeting the lower end of the market. To compete against Apple’s iPad and the variety of tablets that run Google’s Android operating system, it’s offering a new 7-inch Kindle Fire HDX with a 16 GB hard drive for $229 (with advertising on the home screen). By comparison, Apple’s 7.9-inch iPad Mini with a 16 GB hard drive runs $329.

Amazon continues to push hard on pricing, choosing to get its profits from the sales of media and services that run on the device rather than on the hardware itself.

The company is also launching a new 8 GB Kindle Fire HD for $139. The device, though, runs on a slower processor than the HDX models and does not include a camera.

Amazon is also introducing a case for the new models. Called Origami, it folds at various angles to create a stand for the devices in either portrait or landscape modes. The cases, which come in seven colors, attach magnetically. And the case for the 8.9-inch Fire HDX includes a feature that automatically launches a rear-facing camera when the device is slid out to expose the camera.

“It’s important that it be one quick motion, so that you can actually get the picture,” Bezos said.

The feature that has Bezos most excited, though, is the Mayday button, a new tech support service that lets flummoxed Fire HDX users contact an Amazon representative from the device to get help. Tap the button – any day, any time – and a postage-stamp-sized video box will appear with an Amazon tech-support representative ready to help. The service will be free, and Bezos said Amazon’s goal is to have representatives respond in 15 seconds or less.