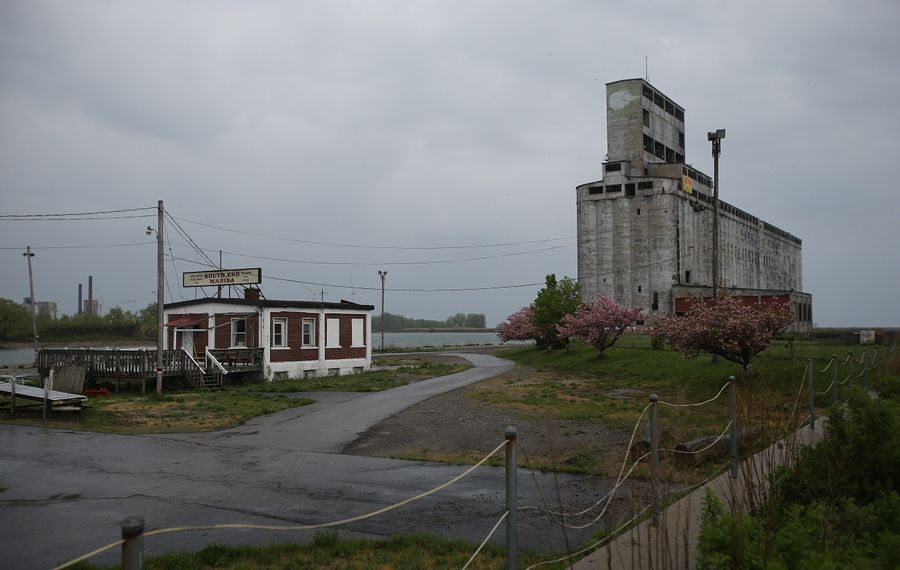 The redevelopment of Buffalo’s long-neglected waterfront – gaining traction with plans for a new state park, piers and a beach – has spurred some private developers to join the action.

The new owners of the South End Marina property along Fuhrmann Boulevard want to convert the 12.5-acre waterfront land south of Gallagher Beach into a mixture of high-end residential, commercial and recreational uses. The group hopes to use the cluster of 66 giant grain silos in its plans, not demolish them.

“That would be a last consideration,” said Rob Zuchlewski, one of the four partners who bought the property at auction for $475,000 in June. “We would like to incorporate those silos if it’s possible, if it’s practical to do it. We’re working with the preservation community.”

The owners also may use the site for heavy industry, if the right situation comes along. They have been surprised by the level of interest in the property from outside Western New York, including from heavy-industrial users, Zuchlewski said.

Some of the calls have come from Canada, and he cited the proximity to the international border as one of the attractive features. The property also includes 6.5 acres of deep-water access on Lake Erie, as well as easy access to both rail and highway transportation.

“Whether it becomes heavy industry that’s a job creator and something that’s an economic engine in Western New York, or it becomes part of what else is happening on the waterfront with recreational uses and living space, there’s a lot of activity and planning going on now for that parcel, but nothing concrete,” he said.

Any industrial use would have to be approved first by the City of Buffalo, which “would only approve what fits into their master plan or vision for the waterfront,” he said. “We want to be good shepherds and stewards of that property.”

That’s great news for the property’s neighbors, like Tucker Curtin, who owns Dug’s Dive near the Small Boat Harbor.

“I’m a proponent for any type of mixed use, anything that’s going to put value on the table for the land,” Curtin said. “Certainly, we don’t want things that are going to be environmentally negative toward the community, but we definitely want to see a mix of a lot of different things, and there’s lots of land down there ... There’s plenty of room for everybody down there.”

And new life for the silos would be welcomed.

“The more of these elevators that we can put back on line the better,” Curtin said. “That’ll preserve these things for years to come. I’d love to see them working again, with a fresh coat of paint on them.”

Economic development leaders hope this will lead to more private-sector investment. “I only see this trend accelerating from here,” said Howard Zemsky, co-chairman of the Western New York Regional Economic Development Council. “Buffalo development has hit the tipping point, and this is just one of so many positive examples.”

The South End property, which includes a honeycomb cluster of old concrete grain silos, has sat underutilized and ignored for several decades, aside from its use by former owners Bill Mackey and Fred Langdon as a boat storage and launch facility until 2009. That’s when a fire destroyed much of its equipment, essentially shutting it down.

Mackey, a retired Buffalo firefighter, and Langdon, former Buffalo fire commissioner, had acquired it in 1983, storing as many as 130 boats at its peak as a marina. But in the wake of the fire damage, they decided to put the property at 1515 Fuhrmann Blvd., including the circa-1925 Cargill Inc. grain mill, up for public auction.

Zuchlewski, David and Dennis Franjoine, and Craig Slater teamed up to buy the property. All four are executives at Buffalo-based demolitions and decommissioning firm Frontier Industrial Corp. – the Franjoines are co-owners, Zuchlewski is chief operating officer, and Slater is the general counsel.

Zuchlewski said his group is focused on reusing buildings and property, not demolishing them. It previously bought part of the Bethlehem Steel plant in 2010 and has been working for three years on cleanup and removal of contaminated soil to prepare it to become a business park called Steelworks Industrial Park. Several tenants are already in place, and Zuchlewski said they “get called regularly” by other prospects.

Long neglected by the city and developers, and virtually abandoned, the outer harbor waterfront has become the focus of significant attention and reuse following successful efforts at the Canalside in the inner harbor.

On one side of the marina property is Gallagher Beach, which along with the Small Boat Harbor will become the first state park in Buffalo after they are transferred to the state by the Niagara Frontier Transportation Authority. On the other side is the new Tifft Street Pier.

“There we are in the middle, just waiting to complement the rest of what’s already been done there,” Zuchlewski said.

The NFTA also is transferring 384 waterfront acres to the Erie Canal Harbor Development Corp., which will seek public input on possible redevelopment options. And nearby is Wilkeson Pointe, a new public recreation space that opened a few months ago.

“Shame on us if we don’t utilize what’s been left here for us to work with,” Zuchlewski said.