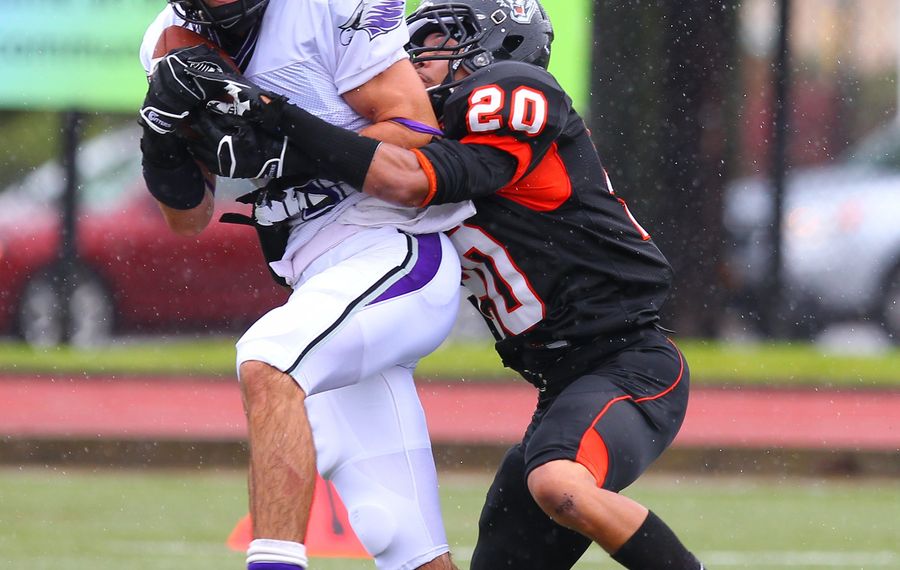 It took nearly 60 minutes to decide last year’s Buffalo State-Wisconsin-Whitewater game but Saturday’s rematch was only in doubt before kickoff.

It took the Warhawks a little more than 90 seconds to reach the end zone and someone yelled from their sideline, “score on every possession” and they certainly gave it a try.

In a thorough performance in every aspect, No. 15 Whitewater rolled up nearly 400 yards of total offense while holding Buffalo State to just 182 and pinned a humiliating 55-14 loss on the Bengals on Saturday afternoon before 521 at Coyer Field.

“There’s no question they were out to settle the score you might say,” Bengals coach Jerry Boyes said. “And they did.”

The Bengals were never in this one as they ran into a team that remembered all too well what happened last season. Buffalo State scored the game’s lone touchdown with just three seconds left to secure a stunning 7-6 triumph over the then-top ranked Warhawks and end their 46-game winning streak.

It was a watershed moment for the program in beating the three-time defending Division III national champions, who at the time had the fifth longest streak in NCAA football history.

“This year they took it out of our hands very quickly,” Boyes said. “For whatever reason we didn’t make plays when we needed to keep drives moving to keep them off the field. Their offense saw way too much of the field in the first half.”

Instead of reliving that memorable day, the Bengals suffered their worst loss since a 57-7 blowout against Rowan in 2009.

“Whether they wanted to admit it or not I think they had a little chip on their shoulder,” Buffalo State quarterback Casey Kacz said. “They’re a great team and they came into the game ready to play offensively and defensively. They weren’t taking us lightly like they did last year.”

The Bengals (2-1) had won their last six games dating back to last season, the fifth longest streak in school history, but had so much working against them. Not only were they facing a team bent on retaliation, Kacz has been dealing with an injury to his right arm since the season-opening win at Cortland and by the middle of last week he could barely throw.

The Sweet Home product was a game-time decision up until kickoff but considering Whitewater wasn’t an Empire 8 opponent, Boyes decided he would rotate Kacz with Dave Jacobs and Kyle Hoppy. Whitewater build a 45-7 halftime advantage and Kacz sat out the second half.

“Once the game started to get a little lopsided, Coach kind of figured there was no point to leave me in and take hits when there’s a good chance I could make myself less healthy for next week,” Kacz said.

Indeed, there’s more riding on this Saturday’s homecoming game against Ithaca (2-0), which beat Union on Saturday, 17-3.

Buffalo State will be better served forgetting all about Saturday. Some of the Bengals’ pain was self-inflicted – the Warhawks returned two fumbles for touchdowns and a third score was produced following a fumble on a kickoff return.

Whitewater’s Marcus Martin took the opening kick back 61 yards to the Bengals 29, then the Warhawks came out in a hurry-up offense. Matt Behrendt fired a strike to Tyler Huber in stride for a 34-yard TD and a 7-0 lead. After tacking on a 21-yard field goal, Whitewater’s Dylan Morang forced a fumble by Mike Doherty on the ensuing kickoff, which was recovered by Chris Treptow at the Bengals’ 31. In a blink it was 17-0 after a 3-yard touchdown reception by Kyle Christensen and the Bengals were stunned.

The Bengals produced just 14 yards of total offense in the first quarter with one first down.

Kacz, who threw for 387 yards and a touchdown in last week’s come-from-behind win over Brockport, was just 6 for 13 for 50 yards with one TD on Saturday. Jacobs was 1 of 8 for 4 yards and an interception while Hoppy didn’t complete a pass in three attempts.

Meanwhile, the Bengals allowed 171 yards rushing from a host of Whitewater running backs while Behrendt was 13 of 25 for 187 yards and four touchdowns.

“We didn’t match, we didn’t punch back and that’s concerning to me,” Boyes said.

Boyes said the staff will watch the film today and revisit the fiasco with the players on Monday.

“Give me a call tomorrow and I’ll let you know whether or not we’re going to watch that with the kids on Monday,” Boyes said.

“Glitter” may be a better option.

“Whether we watch it or not, come Monday afternoon when we walk out of the film room the game is history,” Boyes said. “I won’t even allow the players to mention their name and we’ll move on to the next opponent.”