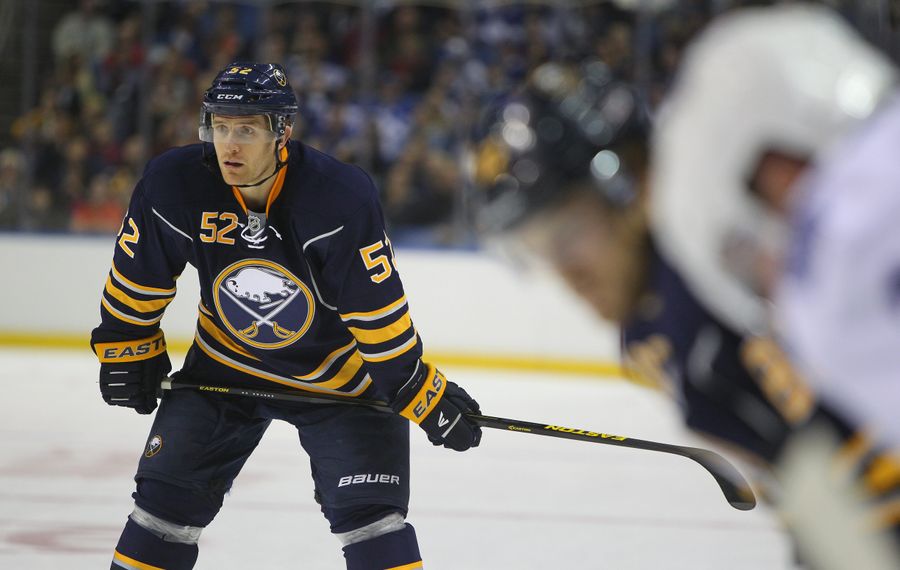 Where he stands on the Buffalo Sabres defense corps remains to be seen. But the biggest point Alexander Sulzer is making during this preseason is that he’s back on the ice and competing for a job in the NHL less than seven months after suffering a serious knee injury.

Early in the first period of the Sabres’ Feb. 23 loss to the New York Islanders that was Ron Rolston’s first home game as the team’s coach, Sulzer collided with Colin McDonald along the boards and limped off the ice.

His right knee throbbing, Sulzer was nonetheless stunned when a team doctor told him in the locker room he had torn his anterior cruciate ligament.

“I felt the pop in my knee and it was really painful. I knew it was not going to be good,” Sulzer recalled prior to Saturday’s game against Toronto in First Niagara Center. “As soon as they came in the room, the doctor looked at it and told me, and I was pretty close to tears to be honest with you.

“I would say that was the worst possible timing for me in my career to get hurt. It was really unfortunate and I felt sorry for myself for a couple weeks. I had to turn around and get my head straight.”

Sulzer had started to develop a good rapport playing alongside fellow German Christian Ehrhoff but his season was suddenly over. He had surgery March 11 in Buffalo and then endured the rigorous rehab process.

In his first preseason game, Sulzer played 17 minutes, 13 seconds in Tuesday’s win at Columbus. That was his first official confirmation the knee was 100 percent.

“It was a really long road and I was just really excited to be back skating with the guys,” he said. “The game in Columbus was really exciting. I was a little nervous because you never know how it actually is until you play a game but it was all good and I’m happy with it.

“In the second period, I got hit four or five times hard in the corner in about four shifts. But it feels good.”

Sulzer played 17:31 on Saturday. The knee got another test when he got pushed feet-first into the boards in the second period by Toronto’s Josh Leivo but emerged unscathed.

Sulzer’s path to the blue line is obviously crowded, with 10 players fighting for jobs. The list includes veterans Henrik Tallinder and Jamie McBain, acquired in offseason trades, and No. 1 draft picks Rasmus Ristolainen and Nakita Zadorov.

“It’s not an easy situation but every team I’ve played on has always had nine or 10 NHL-ready defenseman,” Sulzer said. “I was really curious to see the young guys and they’re really good players. It’s good for them to get their feet wet.

“They’re obviously hoping for a spot too. They’re your competition but we’re all in the same situation. It’s just I’m 29 and they’re 18. I’ve been through it. I know what to expect.”

Rolston only saw Sulzer for less than four periods until the Columbus return but has been happy with what he’s seen.

“He’s very smart, moves the puck well and has good vision,” Rolston said. “He’s a player that is really positive when he walks in every morning. So he’s been a real good influence on the younger guys in the locker room.”

The Sabres re-signed Sulzer over the summer to a one-year, $725,000 deal. For now he seems like he can be some relatively cheap insurance.

“There was a lot of uncertainty. You never know what the plans of the organization are,” he said. “I thought when I was in the lineup I always played pretty well. They knew what they get from me and I wasn’t a wild-card. I was hoping to come back here. I like it and I found a spot and I would love to continue.”

The teams combined to go 1 for 30 in the shootout as the goalies split 24 saves and five shots missed. One of Jhonas Enroth’s 13 saves came when Leafs defenseman Paul Ranger kicked his stick to propel the puck toward the net. Enroth slashed at Ranger as he skated past the crease.

“My first reaction was that he tried to embarrass me there a little bit,” Enroth said. “But when I look at now it’s good that he’s trying to be creative.”

The Sabres did not use Zemgus Girgensons in the shootout and coach Ron Rolston said the rookie suffered a hand injury in overtime and was unavailable. Rolston did not have an update on Girgensons’ status.

Had the shootout been in regular season play, it would have tied the longest in NHL history. That was set when the New York Rangers beat Washington in 15 rounds on Nov. 26, 2005. The Sabres’ record is an 11-round loss to Colorado with Patrick Lalime in goal on Jan. 9, 2010.

Cracked winger Steve Ott: “At one point I think both refs were just going to call it a draw old-school and kind of pick up the puck and go home.”

Rolston said after the morning skate the Sabres would probably cut the roster to the range of 26-28 players after tonight’s game in Toronto but the Sabres got a head start on the moves Saturday afternoon by sending Dan Catenacci, Jerome Gauthier-Leduc, Tim Schaller, Phil Varone and Jamie Tardif to Rochester (Tardif pending waivers).