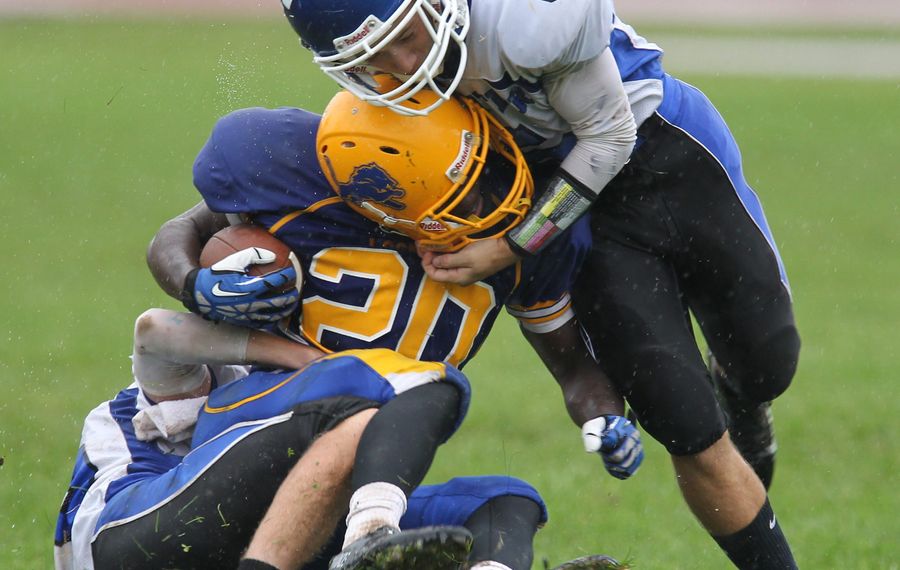 LOCKPORT — The offense was impressive. The defense was oppressive. Add them together, and after Week Three of the 2013 high school football season, Frontier’s motto for the moment is “three down, one to go.”

On a rainy Saturday at Max D. Lederer Field, Frontier dominated Lockport, 23-0, in a battle of unbeatens that left Frontier 3-0 overall and in Class AA competition. Senior quarterback Tyler Gaglia ran for one touchdown and threw for another as the Falcons seized a 16-0 first-quarter lead thanks in large part to a defense that gave it good field position all afternoon.

“Of course we have expectations of going to The Ralph … but we’re taking each game one game at a time,” Gaglia, explaining the “three down, one to go” approach heading into next Friday’s home game against West Seneca West. “Three games in, luckily we have three wins, and all of our focus is on West Seneca West. We can’t get too big-headed.”

Frontier, ranked sixth among large schools in The News poll, faced a Lockport team which was ranked fifth thanks to a victory that was one of its biggest — and Western New York’s most notable — in recent history.

On Saturday, any statements that were made were made by the Frontier defense, which recorded a safety on Lockport’s second play as several Falcons tackled junior Nick Hamilton in the end zone.

“Our defense played nothing short of spectacular,” said Gaglia. “With that field position – I don’t think we were south of the 30-yard line – we have to score.”

Frontier limited Lockport to 85 yards of total offense thanks to a defense that included playmakers like senior A.J. Licata (12 tackles, four sacks to give him 11 on the season), senior Kevin Hamilton (13 tackles, three sacks) and junior Paul Brinkel (interception).

“To put that goose egg up, that’s a great coaching job by my defensive staff,” said Frontier coach Tim Myslinski. “The reason we got the points we had is because the defense put us in that position.”

A Lockport fumble in its own end led to a short Frontier scoring drive in which Gaglia finished it off with a 2-yard run with 4:04 left in the first quarter. On Lockport’s next drive, a pass on fourth-and-6 from its 38 was intercepted by Hamilton. Soon after, Brinkel ran in from the 2 with 26.2 seconds left in the quarter for Frontier’s 16-0 lead.

Lockport’s next possession ended with a blocked punt, and Gaglia found Licata wide open on a third-and-goal play from the 2. The Falcons had their 23-0 lead with 10:36 left in the second quarter, and there was never a real threat that Lockport would get back in the game.

Frontier kept churning out yards on the ground – and time off the clock – behind Gaglia, Brinkel, senior Kenny Kahler and junior Vinny Pupo, while senior Ricky Fitzgerald ran a very effective Wildcat formation in the fourth quarter. Standout senior back Cameron Coon was in on a few plays, but saw limited action since he has what Myslinski described in NHL Playoffs-speak as “a lower body injury.”

“Frontier is traditionally a very physical and hard-nosed team that executes its offense,” said Lockport coach Greg Bronson, “and we just weren’t able to answer the call.”