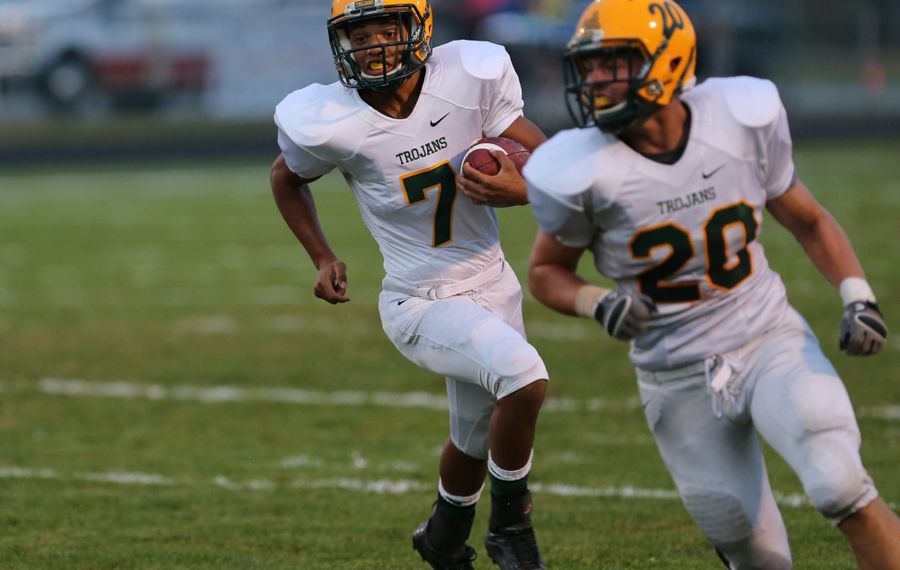 The Trojans (3-0) wowed observers as usual in dismantling Iroquois, 34-6, Friday as the tailbacks combined for five rushing touchdowns behind their menacing line.

Jolexis Santiago scored two touchdowns and Tyler Skretny couldn’t be left out on the fun so he scored two as well. Mike Waterman only had one but made up for it by rushing for a team-high 130 yards.

“I knew the strength of our team would be the offensive line with five seniors across the board,” West Seneca East coach Jim Maurino said. “Our backs have really responded, our quarterback is coming through like a champ and he’s responded well, and the kids have really taken the challenge to keep this thing going.”

The Trojans were a Class A finalist a year ago, losing to Sweet Home while graduating several key seniors, but the backups obviously watched closely and learned. They started the season with back-to-back wins, including last week’s blowout over Lake Shore, and want to make certain the Trojans aren’t a one-hit wonder.

“I think we’re a really good team and I think we can keep winning,” said Santiago, who finished with 60 yards rushing while his TDs covered 19 and 35 yards. “I’m not really surprised because we work hard every day in practice.”

Still, the Trojans started slowly and led by 14-6 at the half. Time for a little halftime motivation.

“The coaches really pumped us up and told us since they switched the divisions around, we can’t afford to lose a game and can’t afford to play flat at the beginning,” Waterman said.

They certainly didn’t appear flat at the end. Skretny scored on a 3-yard run late in the third quarter, then early in the fourth Waterman slipped in the backfield, gathered himself and stopped in the end zone some 27 yards later. Santiago ran some more, as the Trojans put a period on their dominant evening, with a 35-yard touchdown midway through the fourth.

“We challenged them at halftime and as a coach that’s all you can ask for,” Maurino said.

Maurino was pleased to gain a win over a solid Iroquois team that fell to 0-3 but has been limited due to injuries that have sliced into the Chiefs’ depth. Also, the powers that be didn’t do Iroquois any favors by scheduling the Chiefs to open the season against Sweet Home, South Park and West Seneca East.

Iroquois came out with a new wrinkle on offense by going no huddle on its first possession, but after quarterback Josh Piesczynski completed his first three passes, a high snap from center and pressure from West Seneca East forced him to throw the ball out of bounds on third down.

The Chiefs scored their lone touchdown of the game on a 1-yard run by Piesczynski with 57.7 seconds left in the first quarter.

Iroquois’ Ryan Fehr injured his right knee during the first half and did not return. He was helped off the field by two teammates and was later carted away with an ice pack on his knee.