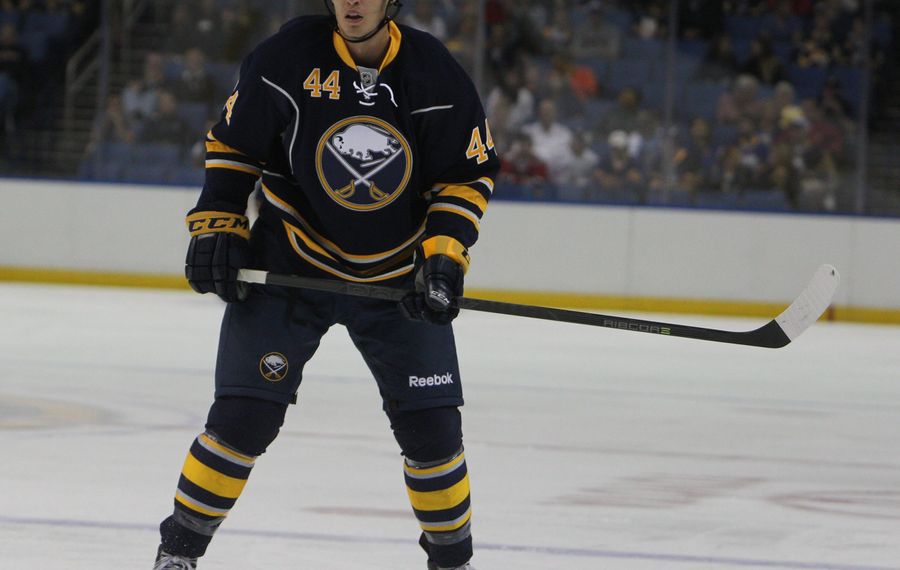 Not long ago, Brayden McNabb was the Sabres’ hot prospect on defense. Buffalo figured his physical skills would plug a hole on the blue line for years to come.

A few drafts, trades and injuries later, McNabb is almost an afterthought. The 22-year-old doesn’t generate the buzz of first-round picks Rasmus Ristolainen and Nikita Zadorov. He doesn’t have the recent NHL experience of Mark Pysyk. He isn’t a veteran like Henrik Tallinder.

None of that matters to McNabb. Like the rest of the defensemen vying for a spot, McNabb feels he belongs in Buffalo this season. He did his best to prove it Thursday.

McNabb scored once and added two assists in the Sabres’ 5-2 victory over Carolina.

“It definitely helps the confidence,” McNabb said in First Niagara Center. “I know I can play here. I just have to go out and show it.”

McNabb shined in his second game of the exhibition season. He ripped a slap shot home and directed two pucks toward the net that were tipped into the cage. The 6-foot-5, 212-pounder wants to display his physical side and offensive skills every time he’s on the ice.

McNabb played 25 games for the Sabres two seasons ago. The big hitter showed a willingness to engage and put up one goal and eight points.

He never got a chance last year despite being solid in Rochester. He had five goals and 36 points in 62 games before suffering a season-ending knee injury in March.

“His game has grown,” Sabres coach Ron Rolston said. “His skating is better. But he’s a young player that’s fighting for a spot right now.”

Though McNabb was considered a long shot to make the Sabres out of camp, he says he can get the buzz back.

“It’s just one game,” he said. “I’ve got to keep going here if I get another chance.”

The Sabres dressed a mountainous defense corps. The six blue-liners averaged 6-4 and 215 pounds.

Tyler Myers topped the height chart at 6-7, with partner Zadorov matching McNabb’s 6-5. Partners Tallinder and Ristolainen are both 6-4, while Pysyk looked small at a respectable 6-1.

“We’ve got the twin towers back there,” Rolston said of Myers and Zadorov. “But you still have to have the potential of being able to move the puck, get around, end plays, all those things that are going to help us be a different hockey team in the future.”

The Sabres put the “C” on the sweater of Thomas Vanek for Thursday’s game. The alternate captains were Cody Hodgson and Henrik Tallinder. … Carolina had two former Sabres in the starting lineup. Nathan Gerbe, who was bought out over the summer, started at left wing. Andrej Sekera, who was traded at the draft, started on defense. The announcement of his name was accompanied by a few boos. Sekera said “everything is better than Buffalo” last week.

Johan Larsson, who joined Mihhail Grigorenko and backup goaltender Matt Hackett as the only players to dress in all three exhibition games, scored twice and won 12 of 17 faceoffs.

“I thought he was arguably our best forward,” Rolston said. “He was on tonight. He was good in the circle. Those are things that we’re looking for out of centermen, obviously, in the faceoff circle, but he’s got a lot of grit to his game.”