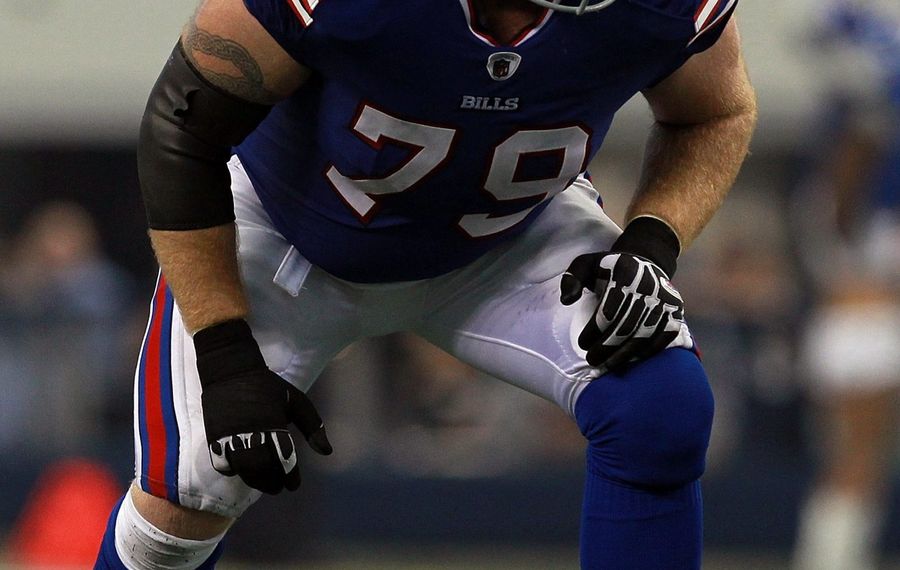 Erik Pears sets a lofty standard each week for the members of the Buffalo Bills’ offensive line – keep quarterback EJ Manuel from needing to put his jersey in the washing machine.

“Our goal every game is not to give up a sack – keep EJ clean back there,” Pears said. “We are working well together and he’s doing a great job of getting the ball out, so it’s working.”

Through the first two weeks of the season, the Bills have indeed done a solid job of keeping Manuel upright. The rookie has been hit just four times in each of the team’s first two games, and sacked only once. Comparatively, the Bills have doubled that number, putting a combined 16 hits on New England’s Tom Brady and Carolina’s Cam Newton over that span.

The O-line is one area in particular to which coach Doug Marrone has dedicated a good deal of his time – no surprise considering he’s a former lineman himself.

The coach’s imprint can perhaps best be seen in left tackle Cordy Glenn and right tackle Pears, both of whom are off to quietly solid starts for the 1-1 Bills.

“I think they’ve been playing well, I think they’ve done a nice job,” Marrone said of his tackles. “They’re going to be challenged each week. They need to get better and develop. I feel fortunate that I’m able to work with them every day in individual and watch that development personally.”

A return to 100 percent health has been a key ingredient in Pears’ success. After starting all 16 games in 2011, he struggled through seven games last season before going on injured reserve because of a problem with his hip.

“Any time you know you’re injured and you’re still trying to fight through it, it’s frustrating not being able to do the things you want to do, so being back healthy is definitely an ease of mind,” he said this week.

Glenn, who missed three games in the middle of his rookie season in 2012 because of a high-ankle sprain, has been dominant at times against good young edge rushers in Carolina’s Greg Hardy and New England’s Chandler Jones.

“It’s nice to get challenged right out of the gate just so you can see where you’re at after all the work in the offseason and training camp,” Glenn said.

The website Pro Football Focus, which grades every play of every NFL game, has Glenn as one of the best tackles in the league through the first two weeks. He’s graded in a tie for second along with New England’s Sebastian Vollmer behind Washington’s Trent Williams on a system that takes into account blocking on runs, pass plays, screens, penalties and the number of quarterback sacks, hits and hurries allowed. Glenn has not allowed a sack, hit or hurry on Manuel, according to PFF.

Using the same criteria, Pears is graded 25th in the NFL, having allowed just one hit and three hurries. It’s been a solid start to the year for the 31-year-old who is in his eighth NFL season.

Both of the Bills’ tackles said working with Marrone as closely as they have has made a big difference.

“That was the position he played,” Pears said. “He’s been an O-line coach, that’s what his background’s in, so he’s naturally going to have a hands-on approach. He knows the position. He knows what benefits it and how we’re working.”

In Pat Morris, the Bills also have an offensive line coach with 16 years of experience in the NFL and another 21 in major college football.

“It’s awesome. They’re covering every angle there is,” Pears said.

Both Pears, at 6-foot-8 and 316 pounds, and Glenn, at 6-6, 345, are massive human beings. They haven’t been beaten by speed rushers to the outside this season, something Glenn credits to their technique.

“Hearing Pat make an adjustment, and then hearing the head coach make an adjustment too, I think that’s real beneficial for us,” Glenn said. “Knowing you’re getting coached up every single time in every situation. You always have room for improvement, something to work on, and that’s what you really want as an offensive lineman.”

Glenn, 24, also said things have been simplified in his second NFL season.

Through the first two weeks of the season, Pears and Glenn have largely done that. If they can keep it up, it will mean one less jersey that needs to be cleaned each week.