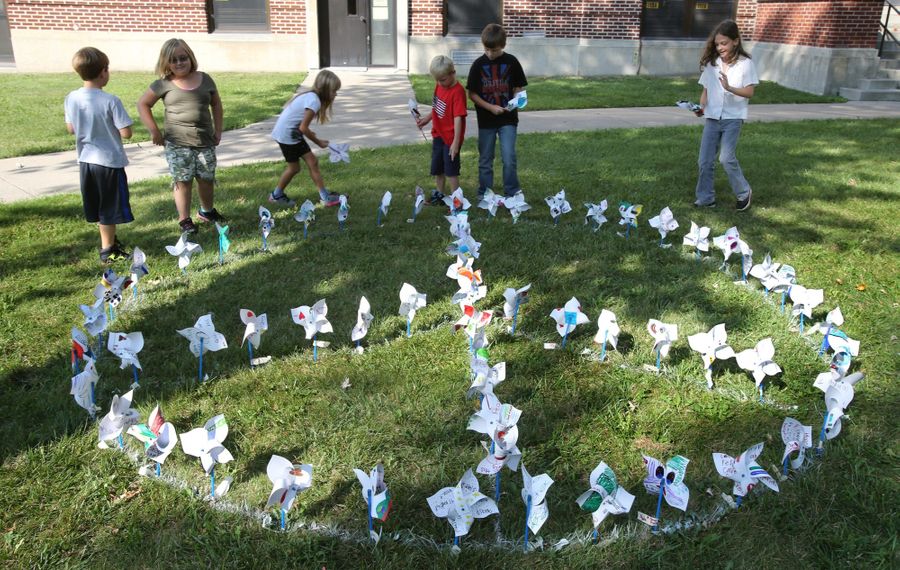 A child’s toy – and the feelings it evokes – has become a symbol in the Cheektowaga-Sloan School District and elsewhere across the globe for the International Day of Peace.

More than 300 pinwheels, arranged to form three peace symbols, were displayed Thursday on the front lawn of Woodrow Wilson Elementary School in Sloan. The three symbols represent students in third, fourth and fifth grades who made them.

An identical display, with approximately 300 pinwheels, will be at Theodore Roosevelt Elementary School today. They represent pre-kindergartners through second-graders.

Both displays were produced by students of art teacher Renee St. Sealander, who introduced the project at the elementary schools three years ago. It was done at JFK High School when she taught there.

“It’s something that a lot more schools are joining,” St. Sealander said.

The International Day of Peace, which is observed Sept. 21, was established in 1981 by the United Nations General Assembly as an annual day of nonviolence and cease-fire. It was first observed in 1982.

The timing of Peace Day was to coincide with the General Assembly’s opening session held annually on the third Tuesday of September.

Pinwheels for Peace is an art installation project created in 2005 by two teachers in Coconut Creek, Fla. The child’s toy was chosen as a reminder of simpler, more peaceful times.

Working on a flat piece of paper, the Cheektowaga-Sloan students were asked to write down thoughts and words about peace on one side and draw their favorite things, as well as things that remind them of peace, on the other. While the words included rainbows, sunsets and doves, their drawings depicted a cupcake, flowers and a baseball, among other things.