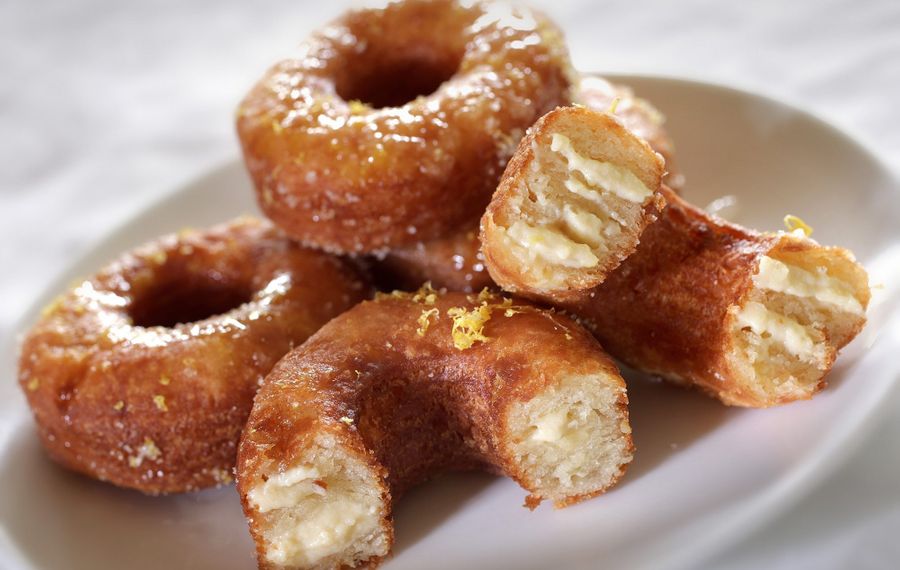 Whatever you call it, the world is agog at the Cronut, a deep-fried croissant-like doughnut. The originals are made in New York, but here’s an option for your own kitchen.

Once upon two months ago, a New York City bakery unleashed upon the world a New Thing. They called it a Cronut – a deep-fried doughnut made with croissant dough, plumped with pastry cream, then glazed. The bakery also trademarked the name, betting that Cronut Fever would lead to all sorts of knockoffs passing through sugar-glazed lips.

Thus, we are calling our take on this delicacy the Crodo. Or maybe the Fauxnut. Or … really, what’s in a name? Just don’t call them “gone.”

You’ll never have to, once you know how to make a version at home. And you can, thanks to a blogger in Britain, if you’re up to the challenge. They’re not difficult, but they are putzy. And you’ll be the coolest kid at the office/brunch/picnic/party when you prance in with a platter of … whatever you want to call them. (Whoop Loops? – because people may whoop.)

Edd Kimber, who blogs from London (theboywhobakes.co.uk), is no slouch around sugar. He won the BBC Two series “The Great British Bake Off” in 2010, and has a new cookbook, “Say It With Cake,” coming out in August. He wrote that he was intrigued when the Dominique Ansel Bakery (dominiqueansel.com) debuted the Cronut on May 10. Lines formed. Within days, scalpers were holding the pastries hostage for $20. $30? $40!

That’s partly because the bakery makes only 300 each day. Supply, meet demand.

On June 3, Kimber posted his version. “Since I won’t be in New York anytime soon,” he wrote, “I thought I would see if I could replicate them at home, and you know what? They are pretty damn good!”

He’s the first to say that he doesn’t use “proper croissant dough.” Instead, he tweaks recipes for quick puff pastry into a croissant dough that needs only 20 minutes of actual labor, and an overnight rest in the refrigerator. The results aren’t quite as tender or lofty as what comes from a truly laminated dough – or what emerges from Monsieur Ansel’s bakery – but for what the New York Times called a Frankenpastry, it’s good enough.

After converting Kimber’s recipe from metric, we tweaked a few things, making them a bit smaller (thus reducing the degree of indulgence), the pastry cream a bit creamier, and shifting the frosting to a glaze. We considered a garnish of ground-up Lipitor tablets, but decided that would send the wrong message.

None of the recipe’s steps is difficult, but there are several. The good news is that the dough and pastry cream need to be made the day before you plan to serve, which spreads out the work.

In the morning, roll out the dough, cut the doughnut shapes, let them rest until they begin to puff a bit, then fry them. Roll them while warm in a lemony sugar, then inject the pastry cream in four quick jabs. Drizzle with a lemon glaze, and serve them with a flourish.

When people ask, “What are these things?” there’s only one response: “You tell me.”

Note: This recipe is adapted from Edd Kimber, a London baker who blogs at theboywhobakes.co.uk. He calls these Lemon and Vanilla Fauxnuts. You’ll have to start the recipe the day before you want to fry these as the dough needs resting time. Instant yeast also is called bread machine or rapid-rise yeast.

To make the croissant dough: Combine milk and ¼ cup water in a small bowl and set aside.

In a large bowl, whisk together flours, instant yeast, 2 tablespoons granulated sugar and salt. With a pastry blender, cut in the chilled butter until it is in bits no smaller than the size of a pea. This is the important stage. You are not making a bread or a pastry so don’t overwork the mixture; you need to see individual pieces of butter.

Add the liquid ingredients and gently fold into the dry ingredients, trying to moisten everything without making the butter any smaller. Once the ingredients are roughly combined, turn the mixture out onto a work surface and lightly knead together to form a ball of dough. Return the dough to the bowl and cover with plastic wrap. Refrigerate for 2 hours.

Remove the dough from the refrigerator and place on a well-floured work surface. Roll out the dough into a roughly 8-by-16-inch rectangle. (It will look quite shaggy.) Fold in thirds, like a business letter, brushing off excess flour. This is the first turn. Give the dough a quarter-turn and repeat the rolling and folding process 2 more times, giving the dough a total of 3 turns. (It will get increasingly smoother.) Wrap in plastic wrap and refrigerate overnight.

To make the lemon sugar: In a small bowl, rub the 1/3 cup granulated sugar and lemon zest together for a few minutes with your fingers. Set aside.

To make the glaze: Stir in lemon juice, a teaspoon at a time, to the powdered sugar to make a thin glaze.

To make the pastry cream: In a bowl, whisk together the egg yolks, flour and granulated sugar (¼ cup plus 1 tablespoon).

In a medium saucepan, bring half-and-half just to a boil over medium heat. Whisking constantly, slowly pour the half-and-half over the egg mixture, then pour this back into the saucepan and cook until thickened, continuing to whisk. Whisk in the vanilla. Pour the thickened custard into a clean bowl, cover with plastic wrap and refrigerate until needed.

To make the pastries: Place the chilled dough on a floured surface and roll to about x inch thick – much thicker than if making a croissant. Using your doughnut cutter as a guide, the rectangle should enable you to cut 2 columns of 5 doughnuts. (If you don’t have a doughnut cutter, use a cookie-cutter, then cut the “hole” with a frosting tip). Cut additional doughnut holes from the scraps. Place the doughnuts on a baking sheet covered with parchment paper and allow to rest until they puff a bit, about 20 minutes.

In the meantime, pour enough canola or vegetable oil into a thick-bottomed saucepan to make it two-thirds full. Heat over medium heat to 340 degrees.

Begin frying the doughnuts two or three at a time, a couple of minutes on each side, until golden brown. Remove with a metal slotted spoon to a wire rack placed on a baking sheet. Gently roll in the lemon sugar, then set aside to cool completely. Continue until all doughnuts are fried and sugared.

Place the pastry cream into a piping bag fitted with a bismarck tip (long and needlelike). Press the tip into each quarter of the pastries and pipe in a small amount of the custard until it backs up in the hole. (You will be doing 4 squirts of pastry cream in each doughnut.) Just before serving, drizzle with lemon glaze. If desired, garnish with fresh lemon zest.