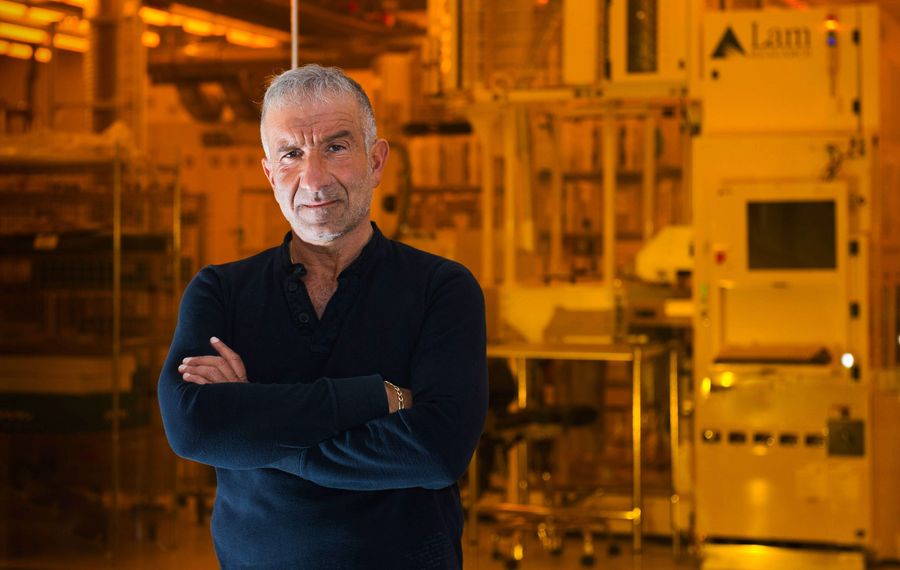 ALBANY – Nearly 40 years ago, a young Alain Kaloyeros served alongside Christian militia forces fighting against Hezbollah troops in northern Lebanon. If you talk to him today, he will show you the scars on his arms from one of the battles.

Now, far from those street battles in and around Beirut, Kaloyeros serves on a very different cutthroat battlefield, where scientists at the nation’s leading universities compete to develop cutting-edge technology that will transform lives – and make money. ¶ So far, Kaloyeros, the chief executive officer at the State University at Albany’s College of Nanoscale Science and Engineering, is winning that battle spectacularly. ¶ Over 20 years, he has – single-handedly, some say – transformed the nanoscience school

dubbed CNSE into a multibillion dollar empire with more than 3,100 scientists, researchers, professors and students, as well as a growing national reputation.

“He is a visionary,” Gov. Andrew M. Cuomo said of Kaloyeros recently. “He sees big ideas. He also gets them done and gets them done extraordinarily well. He has been a real gift to this state.”

Unknown to most New Yorkers, Kaloyeros is seen as a template for the kind of person that college presidents need to find and then unleash to attract companies to their centers of learning – which is just what Cuomo wants to see happen at the University at Buffalo and other State University of New York campuses all across the state.

Cuomo and the State Legislature recently agreed on a plan that will establish tax-free zones for companies that locate on or near college campuses. The governor believes dangling a gift of no state taxation for 10 years will lure companies from all over the nation to unused lands at college campuses.

But for the idea to work, it’s going to take far more than just another corporate tax-break program that has been tried in different forms over the decades.

It will take visionary leadership – which, Kaloyeros said, has been lacking at some other SUNY campuses.

So should SUNY campuses go looking for leaders like Kaloyeros?

Assembly Speaker Sheldon Silver, one of Kaloyeros’ earliest backers, thinks so – while worrying that Kaloyeros is one of a kind.

“If colleges could find someone like him, it would be wonderful, but I suspect it will be difficult,” Silver said.

Roots in the Middle East

For one thing, it would be hard to find any world-class scientist with Kaloyeros’ life history.

Alain Kaloyeros (pronounced Ah-lain Kal-e-air-oes) was a young man when his native Lebanon erupted in civil war. And like many young Lebanese Christians, Kaloyeros found himself in the middle.

He got some of his battle training from the Israeli army.

“We were the good guys, honestly,” he said.

The same could not be said, of course, of the Hezbollah enemies he fought.

“The conversion by sword is fundamental to them,” he said.

Eventually, Kaloyeros left the battlefield and returned to college in Lebanon. After graduating, he moved to the United States to get a doctorate at the University of Illinois at Urbana-Champaign.

Few then had ever heard of the field he studied, and few still have.

You might call it making big things out of small things.

And from the moment he arrived at the University at Albany after getting his doctorate, Kaloyeros has been doing just that, growing a program in nanoscale technology – the manipulation of matter at the atomic and subatomic level – into a fast-growing school.

Silver, the most consistent backer of Kaloyeros at the Capitol, recalls the skinny scientist coming to him 20 years ago for $5 million in state funding to build a clean room to do research on computer chips.

The speaker didn’t know then what a clean room was, but Kaloyeros sold him on that funding request. “He took that and created a legend,” Silver said.

The role of ‘communicator’

Since then, Kaloyeros, now 57, has used a combination of arm-twisting, self-confidence, charm, carnival barking and political skill to transform a campus that Playboy once dubbed the best party college in America into a place where scientists are engaged in research that will end up making billions of dollars in profits for their companies.

And he’s done it without any of the tax breaks that Cuomo now plans to shower on the environs of the state’s college campuses.

Instead, Kaloyeros has used his scientific background and considerable salesmanship skills to persuade top state official after top state official to pour money into his research and development center at the University at Albany – which in turn has lured scores of corporate partners to the campus.

The state has pumped more than $1.3 billion during the past 20 years into the nanotech school to build gleaming, state-of-the-art buildings and to buy the expensive equipment that fills them.

Obviously, it takes some serious lobbying work to win that much state funding, but if you call Kaloyeros a lobbyist, he will cut you off. He prefers the term “communicator.”

Kaloyeros, who has worked under five governors, is not shy about communicating his respect for his current boss. In an interview, he mentioned Cuomo 28 times, and there are giant photographs of Cuomo, along with President Obama, hanging in a rotunda at the college.

“They want to be with him, and he’s the attraction,” Silver said of the 300 company partners working with the Albany facility.

A who’s who of global companies has invested more than $17 billion in and around the Albany SUNY campus. The college provides the space and tools companies might not otherwise be able to afford while assisting with the new technology and working to ensure corporate secrets don’t fall prey to corporate espionage.

“We are truly running the business of academics,” Kaloyeros said of his ever-growing empire of clean rooms and state-purchased “tools” that cost tens of millions of dollars apiece and which fierce industry competitors use nearly side-by-side.

Companies from IBM and Intel to Samsung and Tokyo Electron use those machines to develop new ways to put more and more information on smaller and smaller chips used in cellphones, computers, cars and any assortment of products.

After touring the facility last year, President Obama was impressed. “Now I want what’s happening in Albany to happen across the country,” he said.

Cuomo and the State Legislature want it happening all across New York, at least.

But if other SUNY campuses are to morph into economic powerhouses like the one in Albany, they’ll have to change their ways, Kaloyeros said.

He dismisses talk that his facility got special treatment and says campuses like UB were given much more money two decades ago to develop centers to attract businesses. Gov. George E. Pataki in 2002 came to Buffalo with $50 million in state support for the University at Buffalo’s high-tech Center of Excellence.

“The way the other campuses chose to spend their investments didn’t produce the results we went about investing,” Kaloyeros said.

Many SUNY campuses have not yet awakened to the need not only to use their assets to teach students but also to build a local economy to keep those students from leaving the state after graduation, he said.

“They need retraining,” he said of SUNY campuses. “I think they send lobbyists to Albany to ask for money as opposed to approaching things in a strategic, programmatic way.”

For instance, he noted, UB years ago had the same opportunities as Albany but took the wrong approach.

“The way we started here was we had a core group of corporations,” he said. “Buffalo was more, ‘Let’s build it, have professors run it and see what companies we can attract, which is exactly what Andrew Cuomo is trying to avoid with the Buffalo Billion by having the companies come in first.”

UB is by no means the only SUNY institution that Kaloyeros criticizes. He also knocks the University at Albany for wasting money “on things that are not part of the core mission,” such as a new football stadium, fountains and entrance ways, while cutting nonscience programs such as French that, he said, create well-rounded students.

Worse yet, he said, many SUNY campuses have their eyes trained on Albany instead of focusing on the changing, wider world.

“They didn’t get fat and lazy,” he said. “It was complacency, expecting state resources and relying on them for maintaining and running the campuses. It’s a new world now. It’s the innovation economy, and they need to re-adjust. … It is the Darwin thing. It’s not the strongest of the species nor the most intelligent that survive. It’s the ones most adaptable to change.”

The new world of academics

Change is a constant at Kaloyeros’ campus, and he likes it that way.

He talks of a different culture at the College of Nanoscale Science and Engineering, where professors are judged on such factors as how many patents they get each year or how many hours they spend in community college and high school classrooms, teaching and looking for future nanoscience students. “The business of academics exists as never before,” he said.

“Even the guy who runs the place,” Kaloyeros said of himself, “doesn’t sit in his office like the typical dean or vice president and expect people to come and tell them what they’ve done. I’m as much in the trenches, if not more, as the rest of them.”

That’s for sure. Kaloyeros has 13 patents to his name. And every year, researchers at his school get 300 to 400 patents. Of course, patents mean profits.

And Kaloyeros’ success has raised a question: Does he kowtow too much to the for-profit interests of corporations over what is supposed to be the traditional university mission of educating students?

Kaloyeros has an answer for those who think SUNY presidents and professors now should be worried about having to be economic developers as well as educators.

“We’re expanding the mission,” he said. “No one from the governor on down went to campuses and said you’ve got to stop teaching or stop doing basic research. What he’s saying to them is that, in addition to those functions, you have a mission … of also helping build an ecosystem to train the kids in relevant fields. He’s saying it’s time to make yourself relevant to the 21st century and be creative and entrepreneurial, because it’s a question of survival.”

For his part, Kaloyeros has not just survived, but thrived. He is the highest salaried state worker, earning more than $1.3 million a year. That salary, paid by the state and the SUNY Research Foundation, is more than seven times Cuomo’s, but he does not receive the perks that other top SUNY officials enjoy, such as housing or cars and drivers.

Kaloyeros makes as much as some corporate executives, and he drives like one, too. He owns a Ferrari F458 Spider, which sells for a base list price of $258,000, and happily shows off a picture of it on his smartphone.

The license plate on his Ferrari reads: “Dr. Nano.”

Perhaps that’s because the “NANO GEEK” license plate was already taken: It’s on his Range Rover.

Such four-wheeled displays of wealth are not exactly commonplace in academia, but those who have watched the nanoscience school grow under Kaloyeros’ guidance say he’s earned his reward. After all, he attracted $215 million in outside research grants last year alone.

Given the school’s success, there’s talk in Albany that the state soon will move to break off his facility from the University at Albany to make it SUNY’s 65th campus – run by Kaloyeros and a board dominated by Cuomo loyalists – in time for next year’s elections. To hear Kaloyeros tell it, though, the nanotech school is already a breed apart.

“From Day 1, we’ve done better than the other campuses,” he said. “I know how to invest the money.”