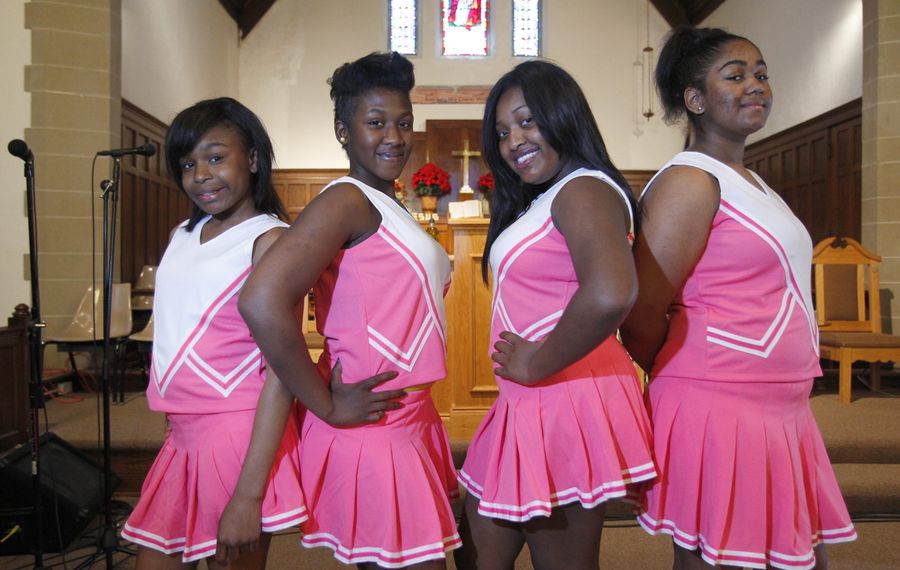 Black women are less likely to take advantage of mammograms and breast cancer detection practices, and are slower to reach out for health care when abnormal results are discovered.

Breast cancer kills more African-American women than any other form of cancer.

These are among the stark realities that the American Cancer Society revealed earlier this year in a report about cancer among African-Americans – and a small group of teenage girls in Buffalo aims to do something about it.

Boob-A-Licious will make its debut today at the Susan G. Komen Race for the Cure in Delaware Park.

The group – dressed in pink-and-white cheerleading outfits – will be encouraging the runners with some choreographed cheers, as well as passing out breast cancer prevention and detection literature as part of race day.

This is just the beginning for Boob-A-Licious. Group members, who meet at New Testament Revival Cathedral at Kensington and Midvale avenues, plan to lead educational efforts at the various schools they attend, become a mainstay at city health fairs and community gatherings, and attend future Komen races.

They also plan to help Carl Bailey make a movie about breast cancer among African-Americans.

Bailey has enlisted the help of Cory and Casey Sampson, 18-year-old twins from his church, Elim Christian Fellowship, to film a movie in the coming months in Buffalo. He will shoot Boob-A-Licious members today for what he expects will be the last scene.

The film – with the working title “Why Should I Care?” – will be about 30 minutes long. It will debut in Buffalo and be made available to churches and civic groups across the country, Bailey said. He said he has applied for a Komen grant to help pay for production and he hopes to land actor Richard Roundtree to play a role. Roundtree is a breast cancer survivor.

The Sampson brothers and members of Boob-A-Licious will help write the script – which will be geared toward young people – as well as act in the production, Bailey said.

Drayton’s husband, Bishop Gerald Drayton Sr., is pastor of New Testament. Their granddaughter, Ta’Mar Drayton, 16, is one of the founding members of Boob-A-Licious, along with DeJanae Brooks, 19, and Kristina Henry and Aaliyah Robinson, both 14.

“A lot of young people don’t like to listen to older people so I hope we can get the message across,” said Kristina.

The group, which seeks more members, is an outgrowth of Smart Girls Have Expectations, or S.H.E., a New Testament church-based group designed to mentor girls to carry themselves with purpose, make good choices, and have a positive impact on their communities. Both groups are run by Destiny East, 30, a commercial loan specialist with M&T Bank.

“What we’re finding is that people we’re close to – aunties, grandparents, parents, neighbors – are passing away from breast cancer, and a lot of people don’t have enough understanding or knowledge about why, and what they can do to prevent this,” East said.

The inspiration for the group is Richardine Drayton, the New Testament pastor’s mother, who lived in the rural South when she was diagnosed and died from the disease about 15 years ago, in her mid-60s.

She didn’t go to the doctor after her diagnosis and didn’t tell her family about her condition, said Kandice Drayton. “She tried to take Tylenol to control it.”

Drayton and others involved in the new effort don’t want inexperience with breast cancer to cut other lives short – and they aim to start their efforts with young people, to set a good foundation.

The once more common stigma of breast cancer has largely disappeared in all ethnic groups, but access to affordable health care appears to be among the reasons the death rate among African-Americans diagnosed with the disease is higher than for whites, according to the American Cancer Society. Socioeconomic factors appear to play a role. Twenty percent of African-Americans are uninsured versus 11 percent of whites.

Those interested in joining Boob-A-Licious, participating in the movie or making a donation toward movie production costs are asked to call organizers at 259-6652 or 833-2148; Register for the Race for the Cure at the Delaware Park Rose Garden from 7 to 10 a.m. today, prior to the start of the race. email: refresh@buffnews.com