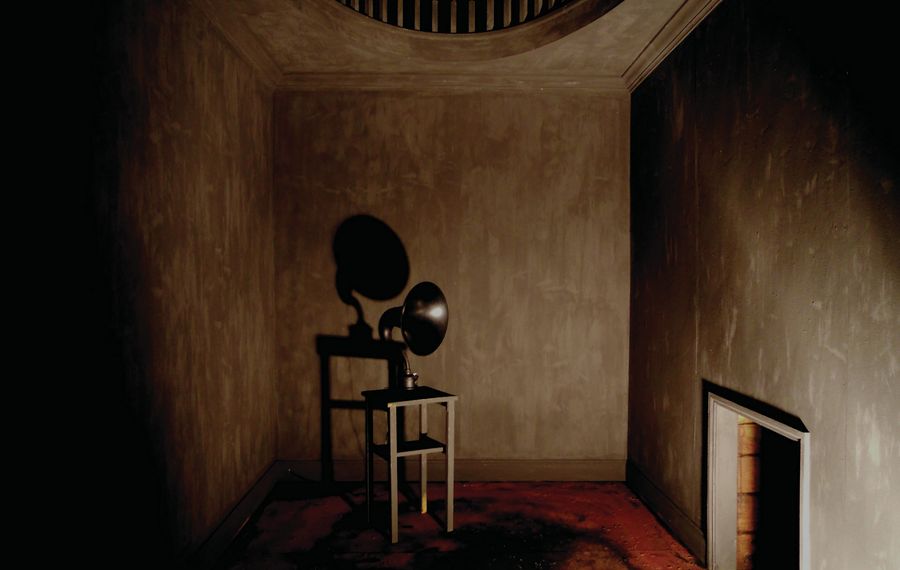 A sense of childlike wonder and fear often pervades the work of Patrick Robideau, a Wheatfield-based artist whose strangely alluring work emerges from memories of his childhood.

For the past decade or so, Robideau has been creating odd and mildly unsettling environments into which viewers can either peer or physically enter.

To view his 2010 installation “Pat Farm,” in the Burchfield Penney Art Center’s soon-to-be-shuttered Useum space, viewers had to mount spelunking lights on their heads and crawl on their hands and knees like moles through a seemingly subterranean space until they stumbled upon a spectacular, otherworldly tableau. That project, which entranced kids and adults alike, remains one of the most memorable museum experiences I’ve had.

Robideau’s newest work, a haunting installation called “Hallway,” has transformed the gallery of Hallwalls Contemporary Arts Center into dream-space that is all but unrecognizable to veteran gallerygoers. Its centerpiece is a series of dimly lit rooms constructed in the gallery space, through which visitors inch their way along as their eyes adjust to the darkness.

As your retinas gradually widen, you’ll be able to glimpse a sandbox-sized outdoor space surrounded on all sides by reclaimed windows. It’s an architecturally improbable space, with windows looking out on other windows across a tiny expanse of dirt and rubble. A distant light pours through the south window pane, its source unknown. The effect is of being in a half-painted dream, where the normal physics don’t apply and a fuzzy confusion reigns.

As you follow Robideau’s path, you come upon a two-tiered space, the upper floor of which was modeled on a balustrade in Rochester’s George Eastman House. Because of Robideau’s meticulous lighting, you cannot detect where the ceiling is – or even if there is one. Meanwhile, a strange record plays on a gramophone next to a dusty old chair.

You get the sense that if you stay in this space for too long, you might go slightly mad.

The experience of “Hallway” hovers somewhere between visual art and theater. Depending on your disposition, it will instantly evoke a series of strong emotions, from a chilling sense of disquiet to an insatiable curiosity about how it was made. Each trip through Robideau’s strange hallway, with its heating vents leaking little pools of light from some nonexistent basement onto the floor and its inaccessible second floor that seemed to extend infinitely upward, is likely to create a slightly different reaction. Mine ranged from panic to intrigue to confusion and finally to a kind of hard-won comfort.

Indeed, part of Robideau’s goal with the installation is to ask viewers to slow down, to appreciate their surroundings in a more deliberate way than they’re used to.

There’s a deeper goal, too, of trying to evoke our own childhood memories by reconstructing a livable version of his own.

In another part of the gallery, Robideau presents a towering sculpture of an old house with 13 porches stacked one upon the other. There’s also a smaller and more weathered version of that sculpture embedded in a crawl space within the main installation.

Like much in “Hallway,” this architecturally bizarre creation is rooted in Robideau’s memories of his youth, which he has transmogrified into something stranger, more fantastical and even more frightening than whatever made those memories in the first place. That’s the compelling heart of Robideau’s current body of work, which shows that memories are dark, breathing things with far more creative potential than we ever imagined.