A UB anthropology professor who was named an honorary chief in Nigeria earlier this month received an unexpected honor when he learned that a research center will be built and named for him.

"It was a double honor, and a total surprise," said Phillips Stevens Jr. The research center will be a site for further study of the cache of mysterious soapstone carvings Stevens worked to preserve and protect in the 1960s, when he was stationed in the Town of Esie in southwest Nigeria with the Peace Corps.

The announcement came after a colorful ceremony in which Stevens and 16 others were named chiefs by the king of Esie, Alhaji Yakybu Babalola, who was celebrating his silver jubilee on the throne.

Stevens' visit to Nigeria started with an 11.5-hour flight from Atlanta to Lagos, Nigeria, where he stayed for two days before traveling by road to Esie. "As the crow flies, it's about three hours, but by road, it was six," Stevens said. Events to mark the king's 25th anniversary culminated with the chiefs' installation Dec. 1.

Stevens was given two elaborate suits of traditional Yoruba clothing to wear at the ceremony, during which he was presented with a cap inscribed with his title, "Erewumi," which roughly translates as "he gets along with the images." Stevens was given that name by local residents in the mid-1960s, after he had spent months photographing and documenting the detailed sculptures of men, women, children and animals, and overseeing the building of a museum to display and protect them.

Local residents had been aware of the images' presence in a grove of trees outside town for about a century before officials of the British colonial government learned of them in the 1930s. Stevens' 400-page, photo-filled book, "The Stone Images of Esie, Nigeria," published in 1978, remains the definitive text on the statues.

"There have been a lot of changes in the museum since I left, after we built it in the 1960s," Stevens said. "Three new buildings have been added, and they managed to find some fairly clear prints of some of the photos used in my book, blew them up and put them on the wall in one of the exhibition buildings. So people had seen some of those early photographs of the way the images first appeared when they were discovered in the 1930s."

"A few people at Esie knew about my book, but it didn't get wide distribution," he said. "Research libraries bought it, and it went out of print, so there were no copies of my book around. Some of the people of Esie remembered me, and I was kind of alive in folklore, but only a tiny handful had seen or knew of my book."

The conferral of chieftainships, held under large canopies on a football field, drew some 1,000 invited guests, and, Stevens estimated, perhaps another 1,000 curious onlookers. "It was a really grand affair," he said. 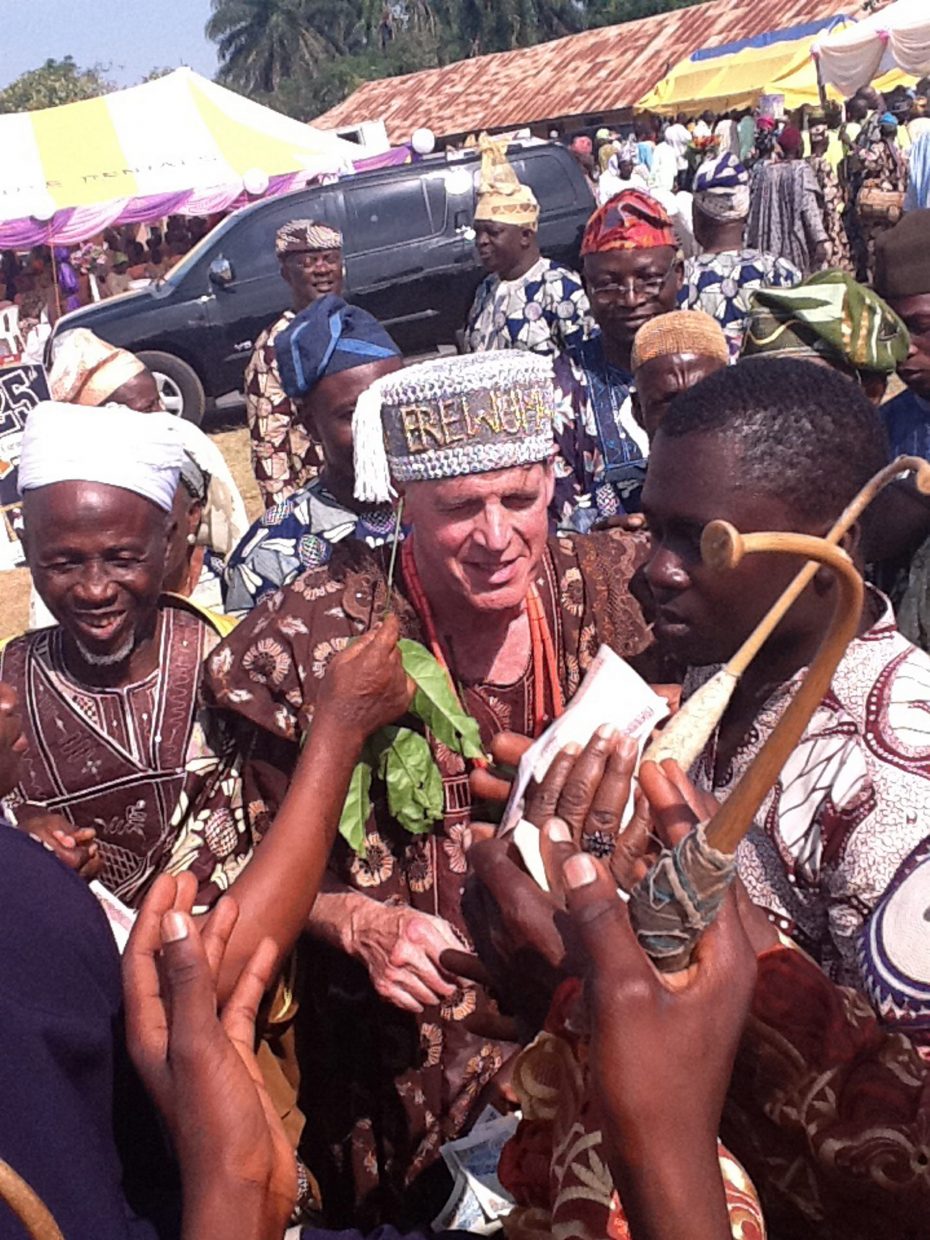 After his coronation as a chief, UB Anthropology Professor Phillips Stevens Jr. wears a cap lettered with sequins spelling out his title, which is "Erewumi," which roughly translates as "he gets along with the images." At the ceremony, Stevens learned that the research center of the mysterious carvings he documented in the mid-1960s has been named after him. (Photo courtesy Phillips Stevens Jr.)

Each chief-elect was brought before the king individually by a group of well-wishers, supporters and drummers. Stevens knelt before the king and the cap, with his title written on it with tiny gold beads was pressed onto his head. Within the cap were stems of large, waxy leaves of the Akoko or African Border Tree, a tree traditionally associated with spirits.

"The newly crowned chief stands up, turns and faces the crowd, and is surrounded and supported by well-wishers, and any who want to grab his arms; you're not supposed to walk by yourself," says Stevens. "So there were people on both sides of me holding my arms and hands and leading me back into the world after this transformation."

Well-wishers also throw small-denomination paper money at the new chiefs. "They try to paste them on your sweaty forehead, but they don't usually stick, they fall over your body and it's kind of like rose petals," Stevens said. Drummers and other musicians play and the new chiefs dance. "Everyone is fed with a pretty substantial meal," he said, then he was whisked off to a meeting with representatives of the National Commission for Museums and Monuments, and learned that the research center will be built and named for him.

"The location is still to be determined, but it will be affiliated with the museum. The idea is very nice and it's a great honor," Stevens said. The Phillips Stevens Jr. Center for Esie Studies may address topics beyond the stone images. "They can open it up to all kinds of other things, economic development, sociology and so on," Stevens said.

During his stay in Esie, which he had not visited since a brief stop in 1994, Stevens said, "I met a few people I remembered. One was a fellow who had worked with me, who is now the chief Imam for the town; he was delighted to see me."

The town, he says, "was very much the same and very different. A lot was totally unchanged and a lot was radically changed, but I am changed and that's the most important thing. When I went there the first time, I was in the Peace Corps, young and naive, idealistic, full of energy, and now I'm an old codger, you know, a little bit more cynical about life. So I think I am looking now through a different set of lenses."

Even the geography of the town has changed, Stevens said, making it "very hard to be nostalgic" for the old sights. "It used to be a mile walk through fields, or a long drive on a dirt road, to get to the museum, and now the town is built up all the way out there and past. The population has just mushroomed."

Each newly elevated chief was honored for work assisting the town or its people, and "There is a set of expectations of each new chief that he is going to continue to contribute to the development of the town or the kingship," said Stevens. So he is rounding up copies of his book to be shopped back to Esie, perhaps to be placed in the research center that will bear his name.

"There's a lot of work still to be done on the great mystery of the origins of this collection of stone carvings," he said. "And that's what this is all about."

Anne Neville– A native of Albany, Anne Neville has a master's degree in public affairs journalism from Ohio State University, where she was a Kiplinger Fellow.