When we settled into our seats at Protocol, I was humming "Darkness on the Edge of Town." Partly because Bruce Springsteen had just played the First Niagara Center, and partly because the room was so dim that I held a lit tea-light against the menu to make out the words, and still wished for a flashlight.

The sprawling Transit Road restaurant hosts banquets on one side and dining on the other. It was nearing capacity when we arrived, with lots of seniors and middle-aged people dressed for dinner, and a sprinkling of youths. We were led through the crowded bar to our alcove, where a white paper-topped table awaited.

We turned down sparkling water for still, and peered at our menus, including a written specials card.

Seafood is a big deal at Protocol, with diners given an ocean full of choices, with more than five "catch of the day" types like barramundi, halibut and Chilean sea bass offered a dozen different ways, from blackened to spice-rubbed. That's every day. Plus the rest of the regular menu, and a half-dozen or so specials. 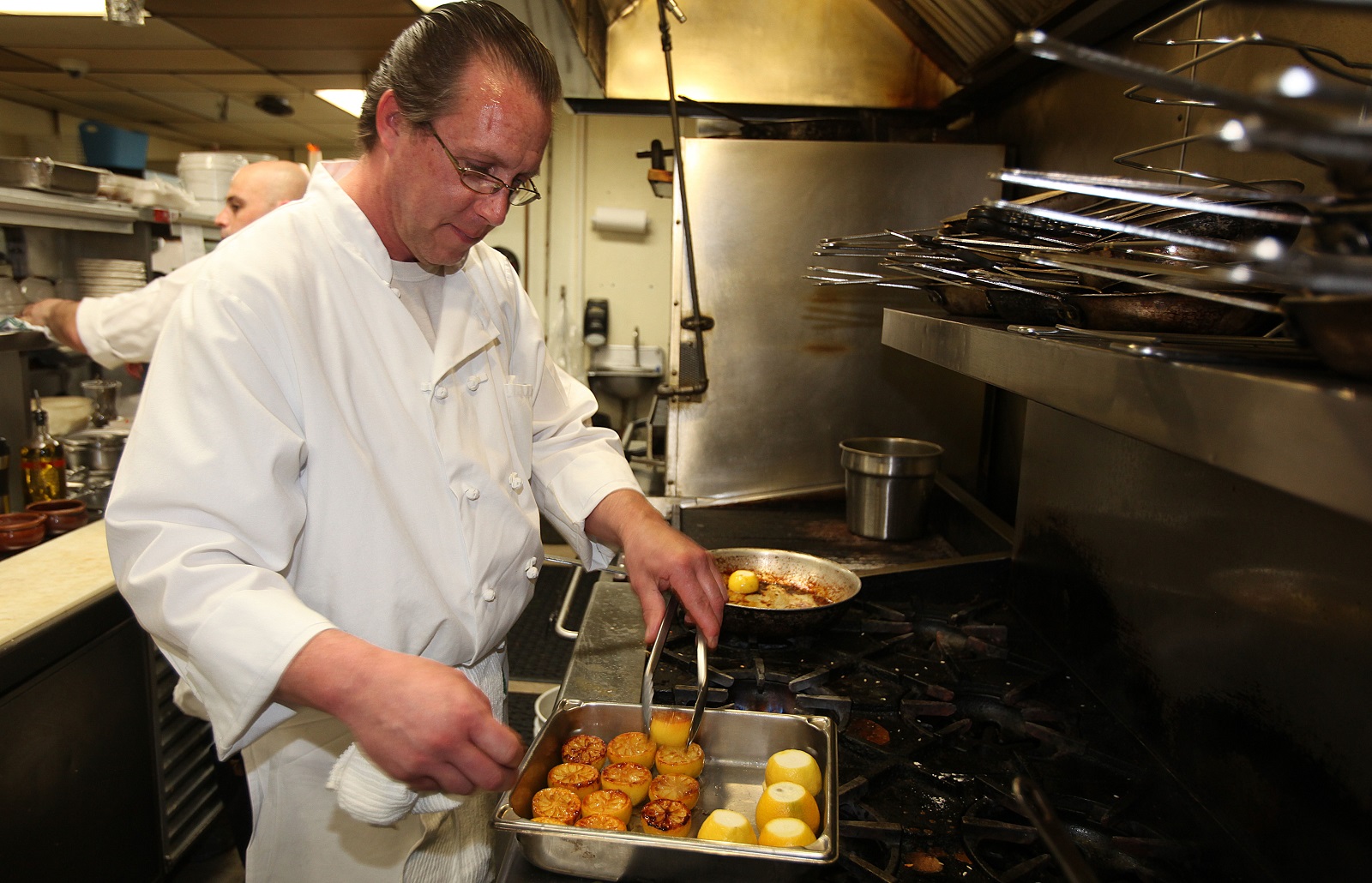 Before that, we expected a two-person Protocol Sampler platter ($15) with tomato bruschetta, stuffed pepper, coconut shrimp and fried calamari that the kitchen agreed to substitute for clams casino. For greenery, we chose a crab cake salad ($12) with lemon poppyseed vinaigrette.

The calamari made me happy -- crispy tentacles and tender rings. It was nearly greaseless and seasoned subtly enough to actually let you taste squid.

Tomato bruschetta in April is usually lousy, but Protocol's was juicy and redolent of basil.

The stuffed pepper was sad, its stuffing dried into a chewy plug. The coconut shrimp were giant, premium shrimp that deserved better than being fried past crispy, with scant coconut flavor.

A huge pile of romaine and other lettuces came coated with thin, tangy mayonnaise dressing. Two seared crab cakes, the size of a Skoal tin, were dense with strands of moist crab. The binder held the cakes together but let the sweet crab shine. Some of the lettuce could have been cut into more manageable pieces.

Cat's pork chop was a hefty, smoky beast, delivered medium as requested. It was delightfully juicy, a good example of pork best enjoyed pink, with an addictive sticky-sweet barbecue sauce. It was accompanied by the welcome bitterness of broccoli rabe and a hash of al dente sweet potato and Granny Smith apple. Everything on the plate sang together, a rare sound to my ears.

My halibut didn't show signs of searing, but the rich fish consorted amiably with tangy, buttery dill sauce, the sauvignon blanc's acid lightening the combination. I squeezed out the griddled lemon that accompanied it for even more brightness.

The jasmine rice was aromatic and fluffy, well-suited for soaking up more of the sauce. Strips of white asparagus and broccoli rabe finished the plate.

Cat ordered the Derby pie for dessert, but after 10 minutes our server, attentive throughout the evening, revealed it was gone. She ordered apple cobbler, and I the key lime pie (both $7).

The creamy lime pie was a tangy delight, though the crust could have been flakier. Cat's cobbler was mushy and barely warm. Told of her discontent, our server brought her a slab of flourless chocolate cake studded with chocolate bits, with dark chocolate flavor, and a texture between fudge and butter. Apologies accepted.

Description: An ocean of seafood choices and fine land-based dishes, too, at Transit Road restaurant and banquet facility.

Parking: In the lot.