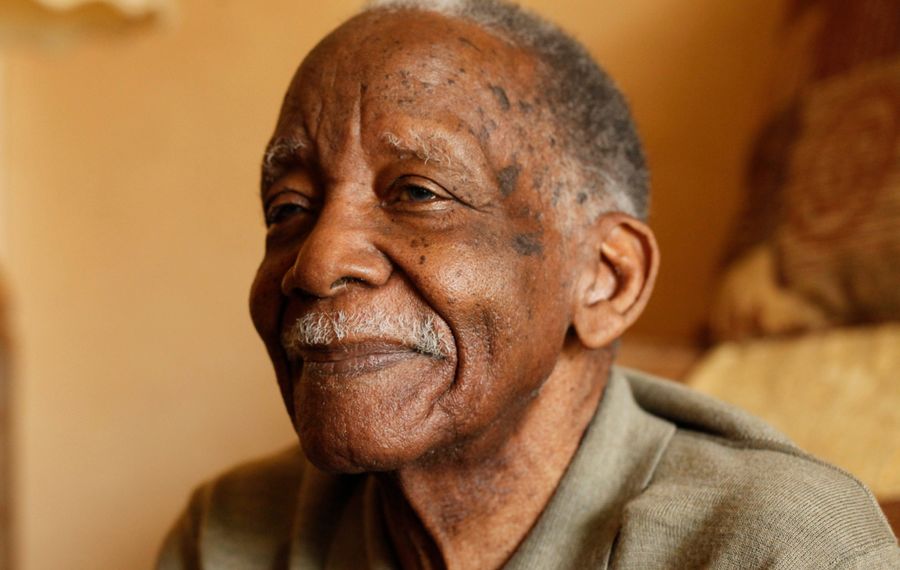 Howard G. Powell was drafted into the Army in 1942, but instead of being assigned a rifle, he was put to work taking notes and typing.

That's because he had a skill the Army valued. At Fosdick-Masten Park High School, he had taken shorthand, and the military needed soldiers who could rapidly take accurate notes at disciplinary proceedings.

"I covered court-martial proceedings in the Pacific Theater for soldiers who were brought up on charges of dereliction of duty," Powell says. "I covered the hearings in shorthand and did a lot of transcribing."

Unlike other African-American soldiers who were placed in all-black units, he served in a mostly white battalion. Race was not a factor, he said.

When he wasn't working at disciplinary hearings, he drove a truck, delivering supplies on Pacific islands from Hawaii to the Philippines.

And while Powell had a front-row seat to history in World War II, he says, he is also proud of being part of a historic group of African-Americans who hold claim to being members of the first generation of native Buffalonians of black ancestry.

Born in 1921, he and many other African-Americans made up that local generation, and they shared a special bond in being able to call this Northern city their hometown.

His father, Kydson F. Powell Sr., came to Buffalo from Canada. He had lived near Windsor, Ont.

As the family story goes, Buffalo's economic opportunities back in the early 20th century beckoned Kydson Powell. He found work as a porter, or redcap, with the New York Central Railroad.

While working the rails, he met his future wife, Edna, from Scranton, Pa., and they married. She was a homemaker, music instructor and organist at St. Luke AME Zion Church.

Howard Powell, the third-youngest of their four children, followed in his father's footsteps, working as a redcap at the old Central Terminal until Uncle Sam interrupted his career with a draft notice.

That is when Powell got the chance to put his shorthand skills to work with the military. He knew he was in a sensitive position, with the careers of soldiers on the line at courts-martial.

Instead of combat, he explains, he witnessed another side of the war -- soldiers in precarious positions for allegedly violating orders.

Upon returning home from the war, he resumed working as a redcap but soon began employment at the Westinghouse plant in Cheektowaga and became one of the company's first black supervisors.

For 41 years, he worked at Westinghouse. Mainly on his income, he and his wife of 64 years, Ethel, now deceased, raised four children, Veronica, Natalie, Myron and Derrick. In retirement, he did some work as a private investigator.

But his life was not all work. He served as an organizer of a party that had been held every other year in the Buffalo Convention Center and had been open to African-Americans who were part of that first generation of blacks born in the city. That fit right into his passion for history.

The party was dubbed "The Buffalonians," and as word spread, the gathering grew from about 100 people to more than a thousand, with folks returning home to Buffalo from all over the country and the world.

But as age creeped up on the organizers such as Powell, it was no longer feasible to put on the extravaganza. Yet even as he approaches the ripe old age of 90, Powell still gets around and is an active member at Our Savior Lutheran Church on Brunswick Boulevard, where he served as treasurer for more than 25 years.

"I have been blessed. I was able to live and to love and to see so much," he says. "I've always believed in God, family and racial pride."