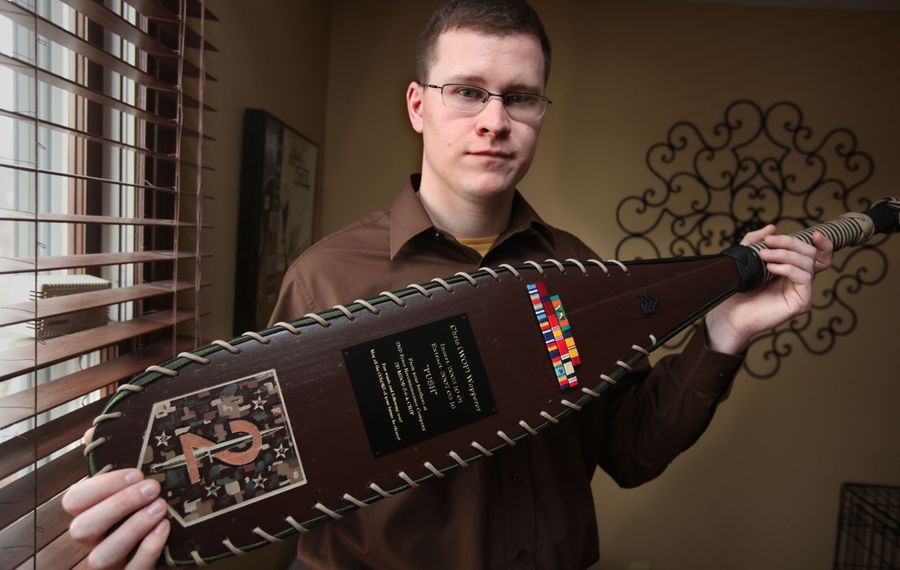 Chris Wopperer is upfront about why he joined the military.

As a boy, he watched "G.I. Joe" animated television shows. As a young teenager, he satisfied his curiosity for war by watching reruns of Hollywood movies on Vietnam and "Rambo."

His appetite for military history took him to nonfiction books about war, and he came to realize that the high-powered action of the silver screen wasn't always accurate.

Then, as a high school senior at Williamsville North, he sat paralyzed in a library study hall watching live images of the terrorist attacks of Sept. 11, 2001.

After a semester at Erie Community College, he realized that the classroom didn't suit him. In his heart, the challenge of becoming a Marine called out.

"I wanted to prove to myself that I could independently function and survive outside Buffalo," he said. "The Marines are the best of the best, the toughest to get into. In the end, when you become a Marine, you earn that eagle, globe and anchor."

Those three objects are the corps' emblem.

Seventeen months after his enlistment, Wopperer was in the thick of battle with Iraqi insurgents.

"First, we were up at the Syrian border doing covert operations and picking up high-value targets. We shut down a couple of border towns that were being used to smuggle in weapons, cigarettes and supplies for insurgents," he said.

"We were on a railroad track and softened the city of Hit up for the rest of the Marines to go in. We picked off the enemy using high-powered scopes," he said.

In addition, the unit carried out covert missions to remove insurgents who placed improvised explosive devices along the sides of roads traveled by U.S. convoys.

"These guys had no clue that they were being watched. Within one or two shots, they no longer existed," Wopperer said.

It may sound harsh, but Wopperer is quick to explain the other side of the situation.

"I have a friend down in Texas with no arms or legs. He was burned over 90 percent of his body from a rocket-propelled grenade that penetrated the bottom of his Humvee," he said. "I also lost quite a few friends from IEDs and combat itself."

In November 2004, he participated in the Battle of Fallujah.

"Propaganda was dropped into the city a month prior to us coming," he said. "We arrived 10 days before anybody entered the city and called in airstrikes and artillery.

"After we softened the city for those 10 days, we blew a hole in the wall surrounding the city, and we basically had key targets to capture, one was a cultural center, another was the mayor's complex, and we essentially went door-to-door.

"We were the hammer. And as we pushed the insurgents, there was an anvil at the bottom of the city to catch anybody coming out," he explained. "We had M1A1 Abrams tanks and air support. This was no joke."

After that extended battle, Wopperer and his unit continued pursuing insurgents elsewhere, and by March 2005, they were back in the States.

It was a well-deserved breather.

But it didn't last long.

By August, he was back in Iraq, this time as a sergeant in charge of a platoon that supplied radio equipment in direct support of Marines in combat.

"We made sure the equipment worked, and we repaired it," Wopperer said. "We still saw action, but not as much. At that point, everything was pretty much calmed down."

When he eventually returned home again, he found that war had worn him out, "mentally, physically and spiritually."

In 2007, he returned to civilian life. He earned a bachelor's degree in business administration and a master's in organizational leadership at Medaille College.

But those boyhood images that had glorified combat "were definitely replaced by the horrors of war," he said.

Unable to sleep, he realized he suffered from post-traumatic stress disorder and tried self-medicating with alcohol. Eventually, be began visiting Buffalo Veterans Affairs Medical Center to receive treatment for the PTSD.

These days, he is a successful salesman at the family business, Thermal Foams in Buffalo.

"I'm where I'm at today," he said, "because of my experiences and the people who have supported me."

Most prominent honor: Navy and Marine Corps Achievement Medal, twice, including a "V" device for valor