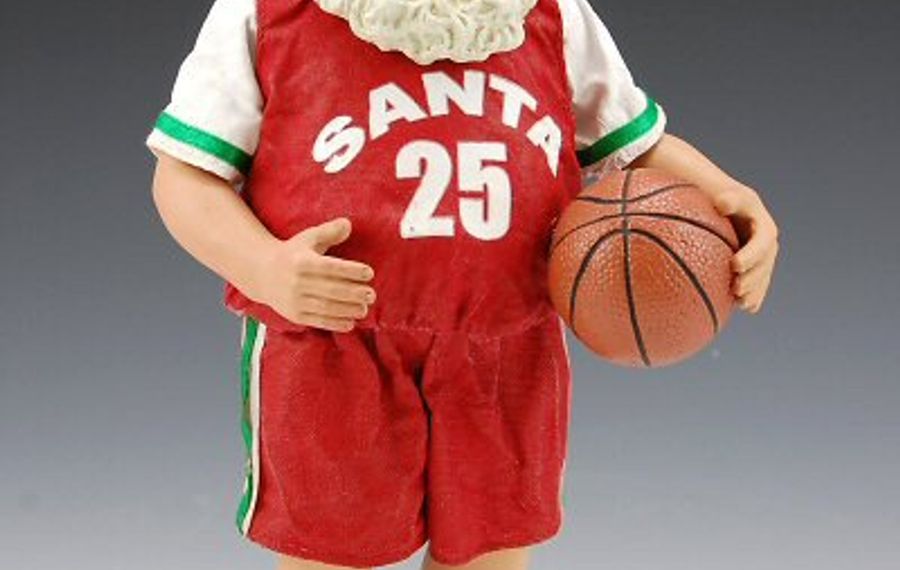 Every week a panel of voters participate in The News' large and small school boys basketball polls. Here's the second polls, published today in the Scholastic Spotlight.

And every week we let you know, like the blog title says ... how The News voted. Here's a link to last week's first ballot, and here's how we're sizing things up just before Santa Claus starts setting up on the low block.

Here's a helpful link if after reading some of this you feel like your team ran one play while you were running another.

1. Niagara Falls (4-0) [last week: 1] -- To paraphrase a certain other voter/blogger, if you didn't vote for Falls No. 1, you'd be a cotton-headed ninnymuggins.

2. Jamestown (2-1) [4] -- They'd get bonus points this week for their uniforms being very Christmassy, but they don't need any. Mathmetologists out there will be able to see that Falls got all 10 first-place votes, and the Red Raiders got all 10 second-placers. With votes like that, these top two are tracking towards Buffalo State like Santa tracks Christmas Spirit with the Clausometer.

3. Williamsville South (3-1) [2] -- These three-kings (get it?) are next in action at the (Holly) Jolly Boys Tournament it hosts. But wait, I have more! Billie fans, did you know the Christmas Goat is one of the oldest Scandinavian and Northern European Yule and Christmas symbols and traditions?

4. Canisius (3-2) [3] -- Love the schedule (beat Riverside big, lost to South small, lost to Falls big), which continues Thursday with Sweet Home at St. Mary's. Going on six games? When do these guys have time to Christmas shop?

5. Riverside (3-1) [7] -- Followed impressive road wins at Wilson and St. Joe's with one at Orchard Park, so they get a bump. That OP win is something of an unwrapped present while ...

6. Williamsville North (3-0) [5] -- ... the Spartans trip to OP is still a Secret Santa mystery. Bonus points to the Quakers if they play "Silver Bells" when Sterling Taplin is introduced.

7. Bishop Timon-St. Jude (3-0) [6] -- The schedule hasn't been the greatest. It's almost been like Buddy the Elf playing hoops against the other elves (a screen shot seen early in the movie that I unsuccessfully scoured the Interwide Net Web for). But we'll take the Tigers for now over ...

8. St. Joe's (3-2) [8] -- ... a Marauders team which has played a schedule of abominable snowmen, but has had the consistency of the faulty bulb in that string of lights on your house. "One goes out, they all go out!"

9. McKinley (2-0) [9] -- We'll have to wait until after the Epiphany (Jan. 6, also the birthday of a certain sportswriter as noted in stocking stuffer Prep Talk Fact-A-Day Daily Calendar) to see the Macks next, but they certainly have the potential to shoot up the poll come 2011, just like ...

Just getting boxed out (again): Frontier again, Maryvale again, Will East again, Orchard Park again and we'll throw Depew and Lancaster (in that order) as possibilities after Lancaster played North tough followed by the Wildcats routing their rival Monday night.

1. International Prep at Grover Cleveland (2-1) [1] -- When the Presidents take on Tapestry on Jan. 17, it could resemble the emotional frenzy that occurs when the kids are let loose at the presents under the tree.

7. Dunkirk (2-0) [NR] -- As I noted last week, I should have voted for these Marauders last week. Merry Christmas to me: You can't put a basketball blog monetary value on the wordplay involving the first four letters in their school name.

8. Lackawanna (2-3) [6] -- It was like Christmas for Lackawanna last Friday. Senior Dondre Alexander got a shiny 1,000th-point while coach Tim Foley hit the career 200-win target as if he was shooting with an official Red Ryder Carbine-Action Two-Hundred-Shot Range Model Air Rifle. And no, noone shot their eye out.

10. Tonawanda (4-0) [NR] -- Should be a fun year in ECIC IV. In recent seasons, an entertaining, multi-team race in ECIC IV was as likely as a successful pitch for a children's book about a tribe of asparagus children who are self-conscious about the way their pee smells.

No chat this week. No chat for a whole year, actually. See you after we start our happy, healthy 2011.