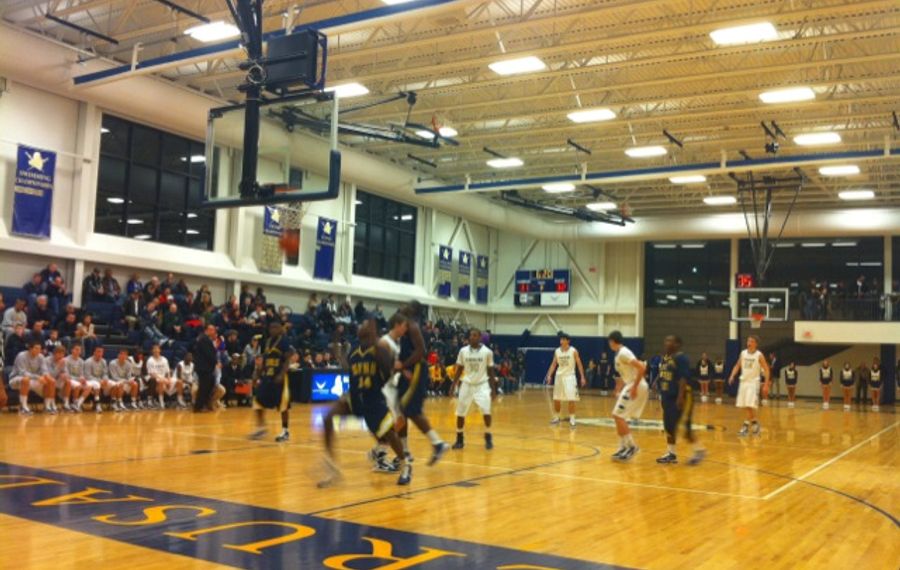 Hello from Canisius High, where the marquee game of the Tom Keenan Memorial Classic will be tipping off as Niagara Falls plays at Canisius.

5:05 p.m. The game was originally scheduled for 4:30 p.m., but has been pushed back since it is the fourth of four games today. There are five minutes counting down on the scoreboard as the teams warm up.

According to the St. Joe's radio crew, Connor Rehbaum hit his head on a fall to the floor in the first half and was kept out as a precaution.

A very impressive win for Aquinas and one that certainly makes Falls' comeback win over Aquinas last Saturday look more impressive. St. Joe's, on the other hand, suffers a letdown after what I thought was a very good performance at Lackawanna on Wednesday night.

5:18 p.m. We have our first timeout, taken by Niagara Falls coach Sal Constantino with 5:46 and Canisius off to a 6-0 lead. A few turnovers by Falls early.

5:28 p.m. Canisius has a 20-12 lead after one quarter thanks to a 7-0 run to end the period, punctuated by Aaron Nevins' swish of a three from the right side with about seven seconds left. Niagara Falls had come within 13-12 on a tough pullup in transition by Taijay Williams, but Canisius closed with some nice energy as Gordon Lyons had a putback of a Nevins miss and Matt Hart put in a very pretty layup, switching hands at full speed and laying it in.

5:42 p.m. We are at HALFTIME with the score Canisius 30, Niagara Falls 30. It's been a pretty great first half, both teams making shots, making plays, not too many turnovers or sloppy play.

Canisius scored the first basket of the quarter -- a Lyons follow -- to take a 10-point lead and it was up, 24-16 on another inside basket by Lyons, showing good control to score against Street (who also showed nice control as to not pick up an early foul).

Falls went on an 8-0 run to tie the game from there, pushing the pace with pressure and scoring in the open court and on rebounds. Six-foot-three sophomore reserve Jermaine Crumpton hit the second of two sweet jumpers from the free throw line to start the run. Street had a putback, and a Crumpton block on the other end turned into a follow by sophomore guard Ja'Leo Wilkins on his own fast-break miss. Wilkins added another follow basket as despite the sophomore's 5-9 frame he came down with his own miss and put it back between two taller defenders for the 24-24 tie.

The teams literally traded baskets for the rest of the half, with Wilkins scoring two of the three, including a very nice pullup jumper in transition with about three seconds left after he pushed the ball upcourt.

Great stuff, what you would like to expect from the No. 1 large school (Falls) taking on No. 3 (Canisius).

5:50 p.m. About 1 minute left until we get playing again. The delayed tipoff of this game has squashed any thoughts I had of making a road trip down to Jamestown to see the Red Raiders host Williamsville South in the final of the United Way Tournament. That game is scheduled for 7:45 p.m. It would have been a lot, even if this game started on time, but I was definitely thinking about it :-).

Falls just came out of the locker room with the Canisius fans huddled around the bleachers booing as they entered. The Niagara Falls cheerleaders lined up as kind of a welcoming move, while Jordan Stree't's dad, Jeff Sr., joined the cheerleaders in greeting the Wolverines. Lots of smiles, some nice high school energy there.

5:54 p.m. Some sort of delay to start the second half; not sure what it was about.

6:10 p.m. At the END OF THE THIRD QUARTER, Niagara Falls leads Canisius, 49-46, thanks to a final-second halfcourt runner by Marcus Feagin. Whoa. That was wild. Should have had the iPhone going. Arghh. Another pretty great quarter with both teams playing at a pretty high level.

6:15 p.m. Hate the scoreboard here because during timeouts every clock counts down the timeout instead of showing the time left in the game. Arghhhh.

Canisius calls the timeout after Falls goes up, 57-50, on a transition basket by Wilkins off a rebound and outlet by Street. Canisius had a basket just roll off the rim before the rebound. Some very good defense being played by Falls. About 5 or 6 minutes left.

6:24 p.m. Timeout by Canisius with less than three minutes left -- stupid clock -- and Falls has turned this game into a blowout so fast I didn't get any of it on the iPhone. Falls leads, 75-54, with just over two minutes left.

Falls had a little cushion and then turned up the defensive pressure -- pretty much going for the jugular. And they got it.

Some late highlights after Falls' run to take control of the game, but a similar theme: Strong rebounding, great defense, great transition.

Interview and stats time for me.

The box score is up at the high school home page's scoreboard section.

Five scorers in double figures for Falls. Very impressive performance by the Wolverines, especially in the fourth quarter.

Video has been posted. Scorebooks are on the right.

And now for the postgame show, with videos now available in HD (as is the above highlight).

Getting videos up to youtube from my phone in HD is a little more involved, so I won't be able to do it all the time, but the extra HD details are great to have, even in interviews like these:

Here's my story on the game, also available on your local newsstand.

A quick word on Williamsville South at Jamestown: Wow. The matchup of defending sectional champions lived up to its billing as the Red Raiders hold on for a three-point win. It'll be interesting to see how the poll shakes out on Tuesday.

Check out the scoreboard on the high school home page, which has improved this week -- the box scores are retractable (previously they were just expandable), the schedule now includes times of all games and there's a cleaner look to the box (called a widget to Web heads).

We'll be continuing to make improvements, so stay tuned. We really appreciate your patience.